Jefferson: The man who moved mountains

Second in a series

He leveled the top of the mountain with gunpowder.

He began the project in 1768, when he was twenty-five. He had his slaves literally sheer off the tip of the mountaintop, peeling away soil rich in iron and clay, revealing bedrock of a local variety known as Catoctin greenstone.

On the flattened plane, he built his dream home. Over the next fifty-eight years, Thomas Jefferson would significantly remodel the house twice more as his personal tastes evolved. The house has a splash of Cavalier Virginia to it, but it also has touches of the classical and the continental.

Jefferson called it “my essay in architecture.” He named his “essay” Monticello.

In English, Monticello translates as “little mountain.” Standing 578 feet above sea level, the little mountain stands as the centerpiece of Jefferson’s five-thousand acre plantation. He’d chosen the location for his home because it overlooked a vista of rolling blue hills and, down in the Rivianna River valley, the growing town of Charlottesville. 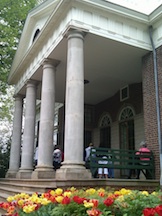 A winding carriage road snaked up the mountainside from valley. During Jefferson’s retirement in his post-presidential years, visitors from all over the country, all over the world, would follow that winding path up to Jefferson’s front porch—frequently unannounced. Jefferson would always welcome them, even if for only a few short minutes, although he frequently invited visitors in for longer chats, too. His close friend, James Madison, himself a president, stayed so long so frequently that he and his wife Dolly had their own room.

A similar road brings visitors to Monticello today, although the final half-mile to the leveled top of the mountain is restricted access only for those visitors who’ve paid the $22 admission fee. Instead of taking the tour bus, I opt to walk up the gravel path, wide enough for five adults to walk abreast, which ascends through the forested west slope of the mountain. Sunlight dapples the path, adorned with the occasional oak leaf or fallen blossom from a tulip poplar.

The path leads to Jefferson’s grave and then to the long, straight brick walkway that leads to the very tip-top of the little mountain itself. The walking path, which forms wobbles to and fro in a lazy loop around Jefferson’s back lawn, is crowded by magnificent tulips beds on both sides.

Monticello’s gardens are, in fact, world famous. There’s even a Jefferson Center for Historical Plants that cultivates and propagates the various plants, flowers, shrubs, and trees grown on the grounds.

And so it is, when I first step into the house, it’s not through the front door but from the deck that extends out from the south side like a long wooden elbow. The deck covers tunnels that connect the kitchen, ice house, wine cellar, and other service areas to the main house. Atop, the deck leads to a side door that takes me into a sun room filled with bougainvillea, man-sized palm trees, and geraniums a yard tall if they’re an inch. The greenhouse also has a few chairs, but I can’t tell if they’re for sitting or for decoration, so I elect to stand. I can see inside the house itself: a view into Jefferson’s magnificent library.

The house features many such large windows. As someone who was such a product of the Enlightenment, it seems only fitting, if coincidental, that Jefferson liked lots of light. The house’s windows are large and plentiful. The house also has twelve skylights, and the dome at the top of the house has, at its center, a four-and-a-half-foot curved window called an oculus.

But I’m no architectural aficionado. Instead, I’m Joe Architectural Average—yet Monticello still awes me. It’s no wonder that this place is the only house in America listed as a World Heritage Site.

And yet, it is a wonder. This entire place is all about wonder.

One could spend days “reading” Jefferson’s architectural essay by strolling the grounds and studying the house and outbuildings and walking the subterranean passages. Monticello is as complex and fascinating as the man who built it—a man who could, and did, move mountains.