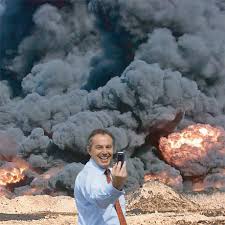 This week it finally emerged that Tony Blair has been waging a 20 month battle to keep some of his advisory relationships secret, and the committee that vets this sort of thing finally got fed up with Blair’s stalling. On Wednesday The Guardian revealed that Blair has been seeking to protect two relationships, one with a South Korean oil firm, the other with the government of Kuwait. Conveniently, as The Guardian points out, the South Korean firm has interests in the Kurdish area of Iraq. Who knew? The Guardian recounts:

According to a committee spokesman, Blair’s claims of the need for secrecy were first made in July 2008, when the committee agreed to break its normal rules, and postpone publication for three months.

Blair’s office went back to the committee in October of that year and asked for a further six months. They promised to let the committee know as soon as the “market sensitivity” had passed.

Committee sources said they heard nothing further and had to “chase” Blair. This culminated in a formal letter from the committee last November. Blair’s office responded last month, claiming the deal was still too sensitive to reveal.

The Kuwaiti deal is a sweetheart, too:

The committee also detailed on its website a similarly unpublished Blair deal with the ruling family in Kuwait. He has been in their pay since December 2007, with the task of producing a general report on the oil state’s future over the next 30 years, at a reported £1m fee.

Well, we’re glad Tony seems to have landed on his feet. The future is always a bit uncertain for former Prime Ministers, and you can’t be too careful. And he certainly seems to know a lot about the oil industry—more than the Kuwaitis, apparently, since they’re paying him all that money to produce a report on the future of the Kuwait’s oil industry. The Daily Mail goes to town with this, pointing out that Blair has so far made about 20 million pounds in income since he resigned.

Former Prime Ministers tend to sort of fade away here. Margaret Thatcher went home and stayed there. John Major continued to putter along, serving quietly in Parliament. Edward Heath sailed on his sailboat, where he seemed much more comfortable than on dry land. They may also have set up some sweetheart deals with companies in their retirement, just to, you know, cushion things a bit, but none has been quite so avaricious as Blair, nor as blatant.

Former Labour leader Michael Foot died recently, and nothing speaks more to the changes that Blair has brought to the Labour party and British politics that to wonder whether Foot would have countenanced such behaviour in the party when he was its leader. To ask the question is to already know the answer.