Are you as lazy as my sister-in-law? 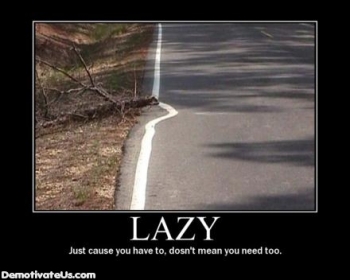 She’s the only one in her family like that. My wife, her sister, goes like a hamster on meth–working, child-raising, charities, training for the New York marathon—you name it. My brother in law works ten hard hours each day, comes home and teaches himself stonework so he can build a new wall in front of his house. My sister in law complains.

But this post is not about her, it’s about a litmus test for laziness. Wonder if you’re lazy? Here’s how to tell. 100% guaranteed.

After my father-in-law died, four of us cleaned out his Ohio house. My wife, brother-in-law and I worked six non-stop hours clearing twenty years of accumulation in the garage—it’s amazing how many half-full cans of WD-40 one man can own—while my sister-in-law spent the morning chatting with the realtor about “marketing strategies.” Just as we finished, the realtor left. My sister-in-law descended into the empty garage, saw the three of us sitting on the now spotless floor drinking pop, sighed and walked past us to a coat-rack, where she removed three hangers, and said with all seriousness, “I guess it’s up to me to do everything.”

For example, ask someone if they’re good at math. People know. No one ever says they’re good when they’re not, or vice versa. Or handy with tools. Or good with directions. Or athletic. People know exactly where they stand.

Then there’s another set of attributes that people fudge on. Ask someone if they’re attractive. Very few people will actually say, “No, I’m repulsive.” Instead people fudge. They say “In my own way,” or “Some people think so,” or “I’m beautiful inside.” Ask someone if they’re clean, and they will rarely say, “I’m a slob. The CDC has an entire wing devoted to tracking the pathogens in my bathroom sink.” Instead they might well say, “I’m clean, but messy.” I’d guess most traits fall into this bucket. Good with money. Or smart. Or likable. We would all fudge if asked those questions. Most of us see our personal glass two-thirds full rather than half-empty.

But then there are the Catch-22 traits, the ones where our self-perceptions are the exact opposite of reality. Like laziness. Or being garrulous. Ask a windbag about people that talk too much and you’ll get an hour lecture on how much he hates people like that. Or boring. Or cheap. Cheap people think that since they paid for the Thai food in 2004, that pretty much clears them for eternity. Or, strangely enough, color blindness. I’ve known three color blind people, all of whom insisted they could see colors perfectly well, even though they always looked like they dressed in the dark. Once in an earlier life, I tortured a color blind co-worker by giving him pop quizzes, using the various bits of colored wire from a phone cable. After he failed each quiz, he would take the piece of wire and find someone else in the building and ask them. Of course they would tell him it was purple or whatever. But instead of helping him understand he really was color blind, this merely convinced him there was a vast conspiracy out to get him. Which brings us to another of those 180 traits: paranoia. If you think you’re not paranoid, you are. Etc.

Clearly our current political discourse is all about 180 degree perceptions. Rush calling Obama a racist. Sarah calling people clueless. Karl worried about government encroachment on people’s rights and budget overruns. And the same rules pretty much apply. Anyone who says they’re not at least a little racist, probably is.

So my question to the S&R crew is: What’s the full list? What personality traits or characteristics are always perceived by the owner exactly opposite of reality?

OK, OK, I know this topic is not as profound as Dr. Sammy’s series on religious scope-creep or as revealing as Wufink’s analysis of expectations bias in earnings announcements. But then again, it’s easy for them to think big thoughts, they don’t have to deal with my sister-in-law.