Gordon Brown at the Chilcot inquiry 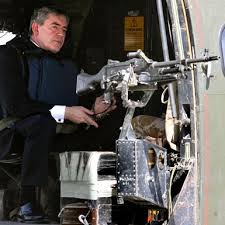 Prime Minister Gordon Brown has just finished testifying (at his insistence) in front of the Chilcot Iraq inquiry. After some discussion of how he thought that invading Iraq “was the right thing to do,” we’ve been getting a stream of figures and more figures and then even more figures in an attempt to justify why the military had what it needed, irrespective of what anyone else has said. Brown himself came across as a rather pleasant and well-meaning sort of fellow—he wasn’t nearly as patronizing as Tony Blair was, nor as abrasive as Alistair Campbell was, nor as apparently clueless as Jack Straw and Geoff Hoon were. He seemed to be trying to be both avuncular and precise at the same time, but he couldn’t help himself—he kept butting into questions with long and detailed explanations as to why the Ministry of Defense (MOD) was in fine shape.

That being said, Brown has attempted to distance himself from Blair—a pattern that practically every other witness except Campbell and Straw has also taken. Ironically, Brown has said on several occasions that he was not completely in the loop, although he does not question his own commitment to supporting the war. Andrew Sparrow, who was live blogging Brown’s testimony over at The Guardian, provides a neat little summary:

• Brown has confirmed that he missed at least two key meetings that took place in 2002 relating to Iraq – the pre-Crawford discusson at Chequers and the military planning meeting in July – and he has said that he did not read Blair’s letters to George Bush. He also said that he did not see the full, March 7 version of Lord Goldsmith’s legal advice.
• He opened his evidence by expressing concern for the loss of life. Blair was criticised when he gave evidence for not showing enough regret about those killed.
• Brown repeatedly stressed the importance of upholding the will of the international community. Although Britain and America justified the war on the grounds that they were enforcing UN resolutions, many countries criticised Blair and Bush for defying the wishes of the international community. Brown also played down the importance of WMD, which was cited by Blair as the main reason for the war. [me—he keeps coming back to the need to support international law throughout the afternoon as well, with no sense of irony whatsoever.]
• Brown is meeting relatives of those killed in the war today. Blair refused to meet relatives on the day he gave evidence.
• Brown said he regretted not being able to do more to get the Americans to plan properly for the aftermath. Blair was less keen to acknowledge this was a problem. He said Iran was principally to blame for what went wrong

Brown’s strategy here was very different from that of Tony Blair. While Blair was defensive, moralistic and occasionally truculent, Brown’s approach seemed to be to try to bore the committee to death, or at least into a stupor. We heard extended comments about how the MOD had more money than, well, people think. He did a pretty good job of rumbling over the committee—they couldn’t stop him from interrupting, apparently, which at least Baroness Prashar was able to get Blair to stop doing. Brown seemed oblivious to anything other than what he saw as his mission—to deflect any questions over the wars in Afghanistan and Iraq back to either Tony Blair or the MOD.

This session, sadly, really brings home some of the limitations of the committee—that there is no one with experience or background in the law, and, more pertinently, no one with any prosecutorial experience, which limits the ability of committee members to respond when they perhaps should. Granted, the role of this committee isn’t necessarily to be prosecutorial—but that sort of background is often useful in at least keeping discussions on track, and in getting people to answer the questions that are actually being asked, as opposed to some other question entirely. At times, Brown was perhaps even more irritating than Blair was in his ability to just sort of ramble on interminably without actually giving a direct response. Most of the time, however, was spent with endless detail and facts, as if that would provide sufficient distraction to avoid any real answer to the still-embarrassing questions about the relationship with America that led to the catastrophe in the first place.

One noticeable Brown comment was his emphatic statement that he never believed any of that neo-con stuff that democracy would magically appear by itself. I’m paraphrasing, of course, but that’s pretty much what he said. This was an interesting comment to make, without any sense of irony whatsoever—he didn’t agree with them, but he didn’t feel compelled to try to keep them from trampling over whatever got in their way either. Brown is no Robin Cook.

Perhaps the most interesting thing about Brown’s testimony was how comfortable he appeared and sounded. There was none of the defensiveness of the other Labour leadership, and the contrast with Blair will undoubtedly be commented on. While Blair and others appeared embarrassed by the fact that both America and the Iraqi government undertook significant policy and military initiatives without consulting the UK, which did of course have certain legal obligations as an occupying army, Brown appeared blithely unconcerned. More generally, while previous Labour party appearances have been characterized by the almost adversarial and/or confrontational response by the testifiers, Brown seemed to be having a conversation, and a not unpleasant one, with committee members. It’s hard to think that this wasn’t calculated on Brown’s part, but it’s also difficult not to give him credit for pulling it off pretty well.

Yes, he avoided direct answers to any number of questions—as one commentator observed, was he talking about the same history as everyone else? And his defense of the invasion was pretty ropey, and will not go down well, although it probably won’t change any minds. Nor will his final appeal that Britain and America need to work more closely together in the future—the proper response going forward should actually be to be more wary of American calls for military intervention, not more agreeable to them. But he has probably helped himself optically—he looked and sounded like a Prime Minister, which is something that hasn’t happened in some time. Brown has many faults, but the unctuousness and condescension that characterized his predecessor are not among them.