So yesterday we hopped up to Oxford to see the Steampunk show at the Museum of the History of Science. Both Oxford and Cambridge have such museums, and they’re both a short day trip from London. And to have a show on Steampunk—the first museum show on the subject, we’re assured. How cool is that?

So for the unenlightened, what is Steampunk? It’s a genre of sf (which can be either science fiction, or speculative fiction, although when I use the latter term, people usually look a little confused, so then I have to explain that it’s what a lot of people call science fiction these days, since the term “science fiction” barely encompasses the breadth and depth of the genre any more—but that’s another post). Anyway, Steampunk (or, more properly, the Steampunk revival) got its start with The Difference Engine, in which William Gibson and Bruce Sterling married hardcore sf with a Victorian world. Originally set in the 19th century, Steampunk novels and stories morphed quickly into indeterminate worlds, with some common denominators. Steam, obviously. Everything – or nearly everything – is powered by steam.

And not just steam. Because the great thing about any really serious, successful sf is taking a particular idea and running with it, ensuring that the world that gets built up has a consistency with the original notion. So to have steam, you need energy sources, which may or may not be real ones (coal, of course) or something else, like Ian MacLeod’s ether. And of course pipes, lots of pipes. And valves. A whole lot of valves. And punchcards, if there are computers. And brass, lots of brass. It’s a mechanical world—there’s often electricity, but never electronics. Everything that requires some sort of process entails a mechanical process.

And, of course, dirigibles.

There’s a whole vast literature out there waiting for you to discover it. Like everything else, there’s good stuff, and there’s not so good stuff. Me, my favorites would include Tim Powers (The Anubis Gates), Ian R. MacLeod (The House of Storms and The Light Ages), and the Stephen Hunt Jackelian novels (three so far, and another one just published two weeks ago). A lot of Alan Moore’s work fits in here too. But there’s a whole raft of good stuff, and a good way to survey the field is through the excellent anthology edited by Ann and Jeff VanderMeer called, funnily enough, Steampunk. There’s a good website run by Hunt—in fact, there are a lot of them, and they’re worth tracking down. If you’re on Facebook, you can get on Hunt’s mailing list for all sorts of interesting stuff.

Because the thing about Steampunk, aside from the fact that it’s produced some genuinely excellent and thrilling fiction, as that’s it’s visual in a way that most fiction is not. There are a whole raft of movies, and even some TV shows, that have all sorts of Steampunk themes and gadgets. Pretty much any Terry Gilliam movie, especially Brazil and Baron Munchausen. 20,000 Leagues Under the Sea. The original Wild, Wild West (and, I suppose, even the horrible movie.) And especially The City of Lost Children, which is like Steampunk heaven.

And then there’s just plain old stuff. Steampunk glorifies machinery, luxuriates in it–and artists have caught on. It just lends itself to lots of physical description. It’s all familiar stuff, like tubes and valves and watches and meters all encased in brass or whatever. It’s all stuff we know, just rearranged. And this has led to is a design explosion, of really cool stuff. You might think that it’s as simple as taking something and throwing a little brass on it, and you’re there. But no. It’s a real Arts and Crafts thing. William Morris and John Ruskin would be impressed with a lot of this stuff. The level of, yes, craftsmanship of some of the stuff that’s been created is astonishing. How about a Steampunk blunderbuss?

Or a Steampunk clock?

Or a Steampunk motorcycle?

There has been a literal explosion of design and art around Steampunk, and that’s what the Oxford show is all about. And there is some very cool stuff there, made by a number of artists and designers, organized by British artist Art Donovan. The group represented is truly international—from America, Britain, Australia, the Netherlands, and France. And the objects are all wonderfully conceived and carefully made, and stunning for the most part.

Or the church tank:

And quite a few of them embody a great sense of fun and droll humor as well, like the “eye-pod”: 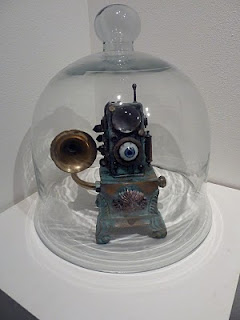 Or these eyeglasses, with the tea strainer hoods:

Or the Steampunk pet: 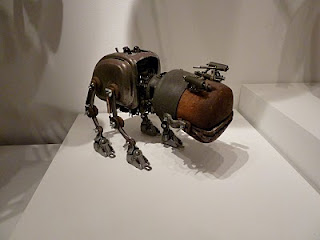 The show itself is in the basement of the museum, one of Oxford’s little treasures, which is conveniently lighted so that you don’t need your flash, which is a good thing, since you’re not allowed to use it. Isn’t that a courteous thing for a museum to do? They end the show with a room full of the real thing—large 19th century brass microscopes, strange gauges, and even a portion of the real Charles Babbage Difference engine, or one of Babbage’s attempts to construct one.

This is all great fun. In fact, that’s perhaps the best thing about Steampunk—it’s pure fun, especially in the hands of accomplished and visionary artists and craftsmen. The show runs through 21 February, just one more week, and the link at the top will lead you to bios of the artists, and a raft of stuff about Steampunk. Worth the trip!