Much ado about Norquist 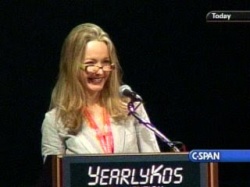 Jane Hamsher ruffled some feathers last week when she forged a temporary alliance with Grover Norquist to call for an investigation of Rahm Emanuel’s activities at Freddie Mac. She also warned us about Treasury’s plan to raise limits on government backing for Freddie and Fannie. She was too late to stop the latter; in fact, Treasury stuffed the fattest, slush fund stocking in history on Christmas Eve. I don’t know if Rahm is guilty. He looks guilty as hell, though that goes for pretty much everyone in that fetid swamp. But the biggest uproar to come from Ms. Hamsher’s activities seems to be the rending of garments and gnashing of teeth that comes from purity betrayed.

I don’t particularly like Grover Norquist. Then again, i don’t pay particular attention to Grover, either. I’d be interested to know whether he considers the DoD part of “big government.” If he does, i might be willing to shop for bathroom fixtures with him.

In her defense against cries that she is sullying herself and progressivism, Ms. Hamsher pointed out that she a) did not contact Mr. Norquist directly; rather, he signed her letter; and b) that Mr. Norquist has a pretty decent track record of allying with pinko-liberal institutions like the ACLU. I don’t remember Messrs. Obama, Biden, Emanuel and Ms. Clinton taking principled stands against heinous bouts of anti-Americanism like the god damned PATRIOT Act. Do you?

So maybe Ms. Hamsher is going to come away from this with cooties, but you know — if you really stop to think about it — that the fundamental problem facing this nation is that two corrupt institutions manage to keep the American people divided against each other. There will always be real differences, and i seriously doubt that Jane Hamsher is going to start calling for bathtub violence against the government. I’d be greatly surprised if she started writing on the benefits of conservative neo-liberal economic policy. She’s no traitor to anyone or anything. Freedom, as you well know by now, is not free; the price is eternal vigilance and the willingness to do what’s right, even when it isn’t the easy thing or the politically expedient thing.

As far as i’m concerned, Ms. Hamsher was doing her patriotic duty and Mr. Norquist saw the same duty to fulfill.

All the rest is just people letting their bumper stickers define them and ending up as hollow as those vinyl platitudes. Barack Obama was right: it’s well past time to move past partisanship if we want to save this country. We missed the part where he explained that what he meant was the two thoroughly corrupt institutions that call themselves political parties would work more closely together to screw the average American, but we don’t need him for post-partisanship.

We need more people doing what Hamsher and Norquist did. Partly so that it isn’t gasp inducing, but mostly because we’ll be fucked without it.