'Twas the Night Before Christmas – as retold by a dog

‘Twas the night before Christmas and out in the kitchen, mom’s cooking something, and man, it smells bitchin’.

The stockings are hung by the chimney with care. Mine’s full of jerky treats – I can smell them from here.

Dad’s drinking egg nog, all spicy and sweet. A couple more cups and he’ll be out on his feet.

When out in the yard we heard such a racket. I started barking and Dad grabbed his jacket.

Dad clicked the deadbolt and opened the door. What I saw in the yard made my jaw hit the floor.

It was a guy in a red suit, he was built like Chris Farley. But there wasn’t a sleigh – he was riding a Harley.

He threw us a wave and wished us good cheer, but I was confused – where’s the reindeer?

He got off the bike and began walking toward us, with a bag on his back the size of a tour bus.

“No more reindeer and chimneys,” he said. “Can’t get insurance, so it’s the front door instead!”

He set down his bag and plopped on the floor, started pulling out packages and boxes galore.

Mom got a necklace, said “that’s just what I want!” Dad got some power tools and tried to act nonchalant.

And then he gave me the best gift of all, wrapped in a bow was a red jingle ball!

As he fired up his Harley and shot up the street, he yelled Merry Christmas and threw me a treat! 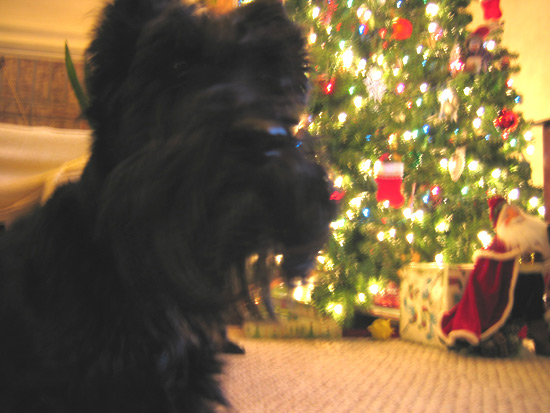