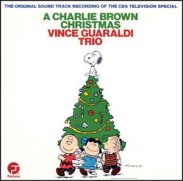 This is tricky. You want it to be calm, since you don’t want the kids to get up and start dancing–that alone lets out The Nutcracker. You don’t want too much singing, because that would be distracting, and you want kids to enjoy Dylan Thomas’s wonderful language and stories. What would be nice is if you knew any Welsh composers who wrote Christmas songs, but you don’t, and I don’t either. So, instead, you want something kind of quiet and noodling and soporific…wait! How about A Celtic Christmas?

Well, how about something else?

What worked for me is A Charlie Brown Christmas, music by Vince Guaraldi. This selection lets me get this album on the list, plus I now don’t need another category called Best Jazz Christmas album (since I don’t know enough jazz to really comment). Guaraldi was actually a very good jazz pianist, but got tarred by having a pop hit, like Ramsay Lewis, and his career never recovered, although he undoubtedly made tons of money from this album. And it’s a very pretty album indeed, even though it’s not remotely Welsh, with some gentle singing (but not enough to be distracting), and some lovely piano work. You probably got it for your kids years ago, and haven’t listened to it since. Haul it out if you can find it and give it a good listen. Even better, put it on, haul out that old copy of A Child’s Christmas in Wales, and read it to your grandkids. Kids love this album.

And while we’re on the subject of Wales, whatever happened to Catherine Zeta Jones? Maybe she should get Sandra Bullock’s agent. Jones is, of course, Welsh. Maybe you didn’t know that. Everyone here does, though. The British always have this love/hate relationship with anyone from here who does well in Hollywood, and Catherine is no exception. Except that it’s really more hate than love in her case, since her reputation is, shall we say, legendary. And she snared Michael Douglas, after a hefty vetting of the prenup arrangement.

So way back when she and Michael decided to invite 500 of their closest and dearest friends to their wedding, which they held at the Plaza hotel in New York. And, just to make sure it was recorded appropriately for posterity, they signed a contract with OK Magazine here in the UK to do the photo shoot. OK is an English glossier and trashier version of People magazine. But it was just meant to be, you know, a small, private affair, for those 500 or so close and dear friends.

And then do you know what happened? Hello! Magazine, the other English glossier and trashier version of People, got hold of some other pictures of the wedding and published them first! And they weren’t actually the most flattering pictures, it must be said–those of Catherine mostly showed her eating, which she apparently does quite enthusiastically, and of Michael looking, well, old–a lot older than Catherine. Which, of course, he is. Michael is, after all, my age, and Catherine most definitely is not. So Catherine and Michael, who live in LA, did the American thing–they sued.

The trial, held right here in London, was great. Every day Catherine and Michael would show up, and lots of pictures would be taken. Catherine happened to be pregnant at the time and looked, well, a little beamy, so we got to see lots and lots of those pictures. The real object of interest, however, turned out to be Michael. Specifically, what exactly was the color of his hair, since it didn’t seem to be a color actually found in nature? Kind of, well, light orangey rust or something. Everyone eventually assumed it was simply yet another side effect of too much botox. You’ll be pleased to know they won the case. But they didn’t actually get much money–£2 million. So everyone claimed victory and went home, but not before we all got to see lots more pictures of the two of them. Although, in fact, it turns out they didn’t really win the case, either–the verdict was later overturned.

Almost as many pictures as we used to see of Madonna, who is reputed to still live here, but who doesn’t really, to the delight of the rest of the country, who were just exhausted with her. And who is not Welsh. And whose new album is supposed to be just great! But the really big publishing news of a couple of years ago was that Madonna wrote a children’s book. Does everyone know this? In fact, she’s written a bunch! There was this huge event at one of the larger bookstores where she premiered the book with a public reading. And she wore glasses! And there were about a thousand TV cameras there to record her reading it aloud! To her daughter, Lourdes, and some other girl who one presumes was suitably vetted for the occasion, chosen, undoubtedly, to make Lourdes look good. Of course, Madonna couldn’t actually be bothered to talk with anyone, other than her really good friend Stella McCartney (Paul’s daughter, the really famous designer), who showed up looking the way she usually does–really wasted, and really poorly dressed. No matter, Madonna is just so special she didn’t actually need to talk with anyone else anyway. And do you know what Madonna’s children’s book was about? It was about this girl who gets bullied by other girls at school because they’re all jealous of this girl who is so perfect. Well, they learn their lesson, and then the book ends. Isn’t that amazing? It was probably churlish of some reviewers to point out that the names of the girls in the book who bullied the nice and perfect girl were uncannily like the names of real girls at the school that Lourdes went to.

You will be disappointed to learn that the book bombed initially–the only folks who bought it, apparently, were gay guys looking for presents they could give each other as a goof. But don’t worry–she had a contract to write a whole series, and she has! She’s now got a gazillion books out there for kids—just check them out on Amazon! And it certainly helps that most of them are available as audiobooks! For her fans, of which she still appears to have many, including those Amazon reviewers! Isn’t she amazing?

And getting back to A Child’s Christmas in Wales. How come the wonderful English/Welsh Denholm Elliott version is available as a DVD in the US, but not yet in the UK? What’s up with that?