The functional as art 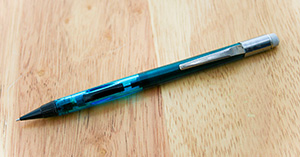 When we think of art, we don’t generally think about the functional pieces of our lives. I wouldn’t claim that my grubby Levis – torn, covered in dried paint and stained with automobile grease and ground-in grass – are art, for example. But as our “What’s it Wednesday” feature has shown, everyday functional objects can be made into art by the perspective of a photographer or an artist looking to create art, but does that mean that the object itself was art? Perhaps, but probably not.

But sometimes functional objects are art. The most common example is architecture – eminently functional, but created to be beautiful or disturbing or awesome or weird, depending on the desires of the architect and the customer. Still, most people wouldn’t consider something as mundane as an automatic pencil as art. Allow me to broaden your mind.

The automatic pencil at right is mine. It’s a Pentel PD345 QuickerClicker with 0.5 mm diameter lead in blue (originally available in gray as well), and I use it nearly every day I’m at work and I had to repair it recently with SuperGlue. It’s one of three or four that I’ve had since I discovered them during my undergraduate studies between 1991 and 1995, and there’s a decent chance that it’s older than my relationship with my wife. And it is a functional work of art, although of a type of art that most people don’t understand.

At first glance, there’s nothing special about the QuickerClicker. It’s a tube of blue plastic with an eraser and a clip. But as with any art, there is so much more.

First, the pencil body is slightly flared at the bottom, where you grip it. The slight flaring makes it more ergonomic and comfortable to hold, but without requiring a NEAR-G (Nasty Evil Annoying Rubber GripTM).

Second, the clip is metal, not plastic, so it lasts through years of being fiddled with instead of snapping off in the middle of meeting, flying across the table, and smacking your customer in the forehead. And the clip fastens to the back of pencil, protecting the pencil’s plastic body from the rigors of erasing and reducing the chance that the pencil will snap or bend.

Third, the eraser is 1/4 inch across, not a mere 1/8 inch like most other automatic pencils. The eraser is therefore big enough not to snap off while erasing large jobs but fine enough to erase a single error in six pages of algebra written on a quadrille engineering tablet. The eraser is held into the body of the pencil with a metal clip that holds the eraser tight but also allows for easy replacement.

Fourth, the pencil’s point is easily unscrewed to allow you to clean out the tip if you’ve got a jam, but it doesn’t come untwisted on its own.

And finally, the advancement mechanism is located in the body of the pencil, nearly underneath where you’d normally rest your thumb, instead of up in the top of the pencil with the eraser. It’s this mechanism that enables the larger eraser and the QuickerClicker’s ability to store so much lead.

Combined, these attributes mean that the QuickerClicker is an object with clean lines, that efficiently performs its functions, and meets the user’s need for a quality writing utensil. It’s a well engineered tool, but that’s only partly what makes it a work of art.

All engineering disciplines that I’m familiar with are roughly equal parts creativity and science. And as with any creative endeavor, there’s an art to engineering a good product. It takes a firm understanding of what the customer wants and needs, the palette of materials and components available, and the tools that make the job possible. In many ways, an electrical engineer “paints” his art with op amps and microprocessors, or he “sculpts” his circuit boards with epoxy, fiberglass, and copper plate. If you work long enough in a large engineering organization, you begin to learn to detect the “brushstrokes” of another engineer’s work in the designs you see. In this case, you can see the artistry that went into creating the QuickerClicker

The most significant problem with calling the QuickerClicker, or any other functional object, “art” is the intent of the object’s creator. I doubt that the engineer or engineers who created the QuickerClicker intended it to be art, unlike a photographer or painter or sculptor. And so, perhaps it is not truly art in the same, intended sense. But if we define art instead as “that which broadens our minds and enables us to better understand and perceive reality,” then my old and worn automatic pencil is art.

I challenge each of you to look into your lives and find the things that you overlook all the time and try to appreciate them with new eyes. You may not conclude, as I have, that they qualify as art. But you’ll have a better appreciation for them.