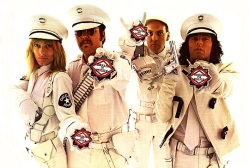 Results: John Lennon is sure to get some serious voter love before the ToR concludes, but it won’t be for his solo efforts. He becomes the second Former Fab to bite the dust, as the Godfathers of Metal handle him and the rest of the pack for an easy victory. The numbers: #12 Black Sabbath/Ozzy Osbourne 52%; John Lennon 28%; New Order 7%; Billy Idol 7%; Bad Company 3%; Rage Against the Machine 3%. Sabbath and Ozzy advance to the Great 48.

Our search for the greatest band of all time now slides over to the Budokan region where the band that put Budokan on the map and one of the enduring greats of rock (and by enduring, I mean they became legends in the ’70s and they’ve now released one of the best CDs of 2009) hosts an eclectic pool of very talented challengers. As always, there should be much to argue about.