The Weekly Carboholic watches "The Day After Tomorrow"

I’m not someone who demands scientific authenticity in my movies. I’m far more concerned with whether or not the movie is good entertainment than I am with whether the science is right. For example, Deep Impact and Armageddon both came out in 1998. Deep Impact is by far the more scientifically accurate of the two. Armageddon, however, is a more entertaining movie. And Armageddon has enough details accurate, or at least plausible, that the geeks among us are generally satisfied and can maintain our suspension of disbelief.

Unfortunately, some movies get it so bad that you just can’t take them seriously. The husband of a friend of mine noticed a serious oversight during the freeway scene in Matrix: Reloaded that destroyed his suspension of disbelief: at least one of the computer generated cars was missing the drivetrain entirely. I didn’t notice, so I found the movie fine. He did notice, and from that point on wasn’t able to take Reloaded seriously.

I just finished a movie that I couldn’t take seriously, even as mindless entertainment, because the director got the science so wrong it was laughable. I just watched The Day After Tomorrow, directed by Roland Emmerich. 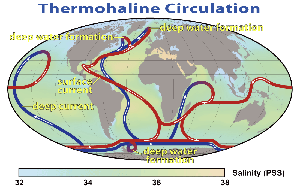 Seriously, if you’ve seen the movie, go to the part where Dennis Quaid’s paleoclimatologist character is giving a talk in New Delhi. Watch the screens behind him that are supposedly showing the thermohaline circulation (see image at right). Not only does the circulation on the screen behind Quaid not have anywhere near the number of branches the real thermohaline circulation, but what should be the Gulf Stream is going up along the western coast of Africa, not along the eastern coast of North America.

After that, everything else became just more and more absurd. The “storm surge” that hit New York? Visually impressive, but it was essentially a tsunami. And it just sort of flowed around the Statue of Liberty, instead of knocking it over. And it flowed between the buildings in New York instead of blasting at least the first few blocks of buildings apart like matchsticks.

That cargo ship that conveniently navigated itself up tight city boulevards and grounded out right next to the library? Deus ex Machina to the max. And last I checked, there’s not a climate model out there that can give you good results within 48 hours – most take months of dedicated time on the most powerful computers yet devised.

And that’s without the cancerous child melodrama, the divorced parents melodrama, the “best friend falls through the ice” melodrama, the President apologizes to the world melodrama, and so on. And the last line of the movie (“Wow – have you ever seen the air so clear?”) nearly made me want to vomit.

About the only thing I really thought was totally and completely accurate about the movie was how stupid politicians are (the movie’s Vice President is a blatent Cheney dig, and it came out in 2004).

I tend to enjoy end-of-the-world fiction and have ever since reading “Lucifer’s Hammer” by Larry Niven and Jerry Pournelle in junior high. I’ve enjoyed Emmerich’s work in the past as well, and from the previews for 2012, it’s going to be another good “kill off the human race” flic. But I recommend that Emmerich stay away from science-based work in the future. Special effects and bad melodrama can’t save a move that is both fundamentally and deeply wrong.

NOTE: I’m sure that, given the movie came out in 2004, much of what I said above has been said before, repeatedly, and probably better too. But I had to say something.