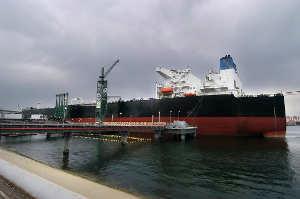 Maritime shipping is responsible for emitting 3% of global carbon emissions, roughly equal to air travel and more than most nations. Worse than that, however, is the fact that most oceangoing vessels burn heavy fuel oil (aka bunker fuel), the heavy sludge that’s left after every other useful product has been refined from petroleum. Bunker fuel emits a truly massive amount of nitrogen oxide compounds (NOx) and, due to its high sulfur content, a huge amount of sulfur dioxide (SO2). According to the International Council on Clean Transportation, one of the ways to reduce emissions at port was to implement “shore-side electricity” in port. This enables a suitably equipped shipping vessel to operate off of comparably clean electricity instead of extremely dirty bunker fuel.

And according to an article last week in the Long Beach Press-Telegram , the first supertanker with a shore-side electricity retrofit pulled into the Port of Long Beach and plugged in.

According to the article, the British Petroleum supertanker Alaska Navigator had to be retrofitted to operate its oil pumps off electricity instead of the bunker fuel-burning auxiliary engines, and it cost the Port of Long Beach $24 million to produce the electrified pier. But the payoff is in the 10,000 gallons of bunker fuel per day that aren’t being burned while the supertanker is in port. The article claims that this saves the equivalent of 30 tons of NOx emissions (roughly equivalent to 187,000 cars) every time the Alaska Navigator – or the other electrified supertankers that will visit the port each month – puts in to offload its petroleum cargo.

And this is just the start – Long Beach is electrifying piers for other shipping vessels as well, as is the Port of Los Angeles. But as Long Beach Harbor Commission President Jim Hankla says in the article, “Ultimately, this all isn’t going to make much difference if the technology isn’t adopted on a global scale.”

Maybe national governments should consider regulations that require shipping vessels and ports to do just that.

According to a new study by EDF, CERES, and CEES, most major companies don’t discuss climate change in their annual reports. According to the study, only 23.7% of companies in the S&P500 even mentioned climate change. Of the sectors that the study looked at, utilities discussed climate change the most often, followed by energy companies and then materials companies. The three worst sectors were financial, consumer products, with IT/telecommunications coming in dead last.

All of these sectors have their own impacts on climate change. Utilities generate our electricity and heat, energy companies drill and mine, materials companies make the plastics and metal that build our civilization. As such, these sectors have the most obvious exposure to climate risks. But telecommunications companies operate massive switching centers while IT companies have large data centers that each use as much electricity as 25,000 homes. Add a significant price per ton to carbon and the price for energy consumed by the data centers and central offices could skyrocket without a massive and simultaneous rollout of energy efficient servers and data storage.

There are other risks, though, to all of the sectors in the S&P500 study. The financial sector, composed of banks and insurers, has risks to investments made by banks and risks due to loss of property from extreme weather for insurers. Consumer products rely on natural resources that could become scarce or expensive, and many inexpensive goods rely on international shipping. Any number of industries that rely on access to water, energy, and raw materials will find themselves similarly at risk.

The ultimate conclusion of the study is that the “material” risks to companies as a result of climate change largely aren’t being disclosed. This prevents customers and investors from making intelligent decisions about what companies to support with their purchases and investment dollars.

There was one significant bright point in the study, however – the percentage of companies mentioning climate change in their latest annual report was the highest yet measured, and it nearly doubled between 2007 and 2008.

According to a BBC story, the Scotch Whisky Association distilleries have pledged to cut their fossil fuel use by 80% over the next 40 years. The story claims that most of the gains will be in the use of renewable electricity and energy efficiency.

The Association plans to make its industry more sustainable through a number of other measures as well. These include light-weight packaging and bottles, reduced landfill usage, water discharge management, and using sustainable oak for casks. As Richard Dixon of WWF Scotland pointed out in the article, “”Since the whisky industry relies on Scotland’s clean environment for its main ingredients it is important the industry takes steps to reduce its potential impacts.”

Sustainability – one more reason to enjoy your scotch.

Last week, Wired put up a set of short videos taken by the NASA Earth Observatory, a cobbled-together but still very impressive camera system aboard the International Space Station. These videos show the effects of human activity on the Earth and range from the drying up of the Aral Sea and Lake Powell to the growth of urbanization of Dubai to the restoration of salt marshes in southern Iraq. They’re impressive for what they show about how much humans can do the Earth and how quickly things can change.

Dependence is dependence, be it energy or minerals

According to an interesting NYTimes/Greenwire article, touting energy independence via renewable sources may trade one type of dependence for another, specifically imported minerals. Most renewable energy sources have some requirement for minerals that are either not widely available, or are not presently mined in any significant amount, in the United States.

The article points out that photovoltaic panels need minerals that are largely supplied by nations in Africa, China, and Russia. Most rare-earth minerals that are used in battery, efficient light bulb, and wind turbine manufacture are available, but not presently mined, in the US, but 97% of them come from China. The USGS has an old publication that discusses some of the issues with rare earth metals and their uses in technology.

Is it wise to trade dependence on the Middle East for oil with dependence on Russia and China for the rare-earth minerals required for the creation of clean energy sources?

This adds another level of complexity to an already horrendously complex set of equations. And just as there will certainly be difficult trade-offs to be made between the conservation of species and wild lands vs. clean energy generation and transmission, there will also be tradeoffs between conservation and mining the very elements required for our technology.