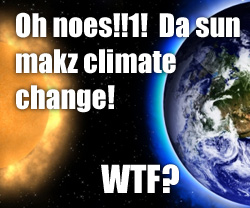 Today, Memeorandum featured a post by climate disruption denier Michael Andrews and writer for the website DailyTech that claimed, among other things, that “even NASA’s own study acknowledges that solar variation has caused climate change in the past.” Not exactly news, but given that this article has been linked by other prominent denier sites like American Thinker, Newsbusters, and WattsUpWithThat, I figured that it was worth a little more looking.

And I’m glad I did, because I came across a great post at The Phoenix Talking Politics blog that pointed out something I’d missed: Andrews got all hot and bothered by a general interest piece that ran in ScienceDaily in May, 2008.

Apparently a significant number of climate disruption deniers are getting desperate for vindication. Talk about embarrassing.

What’s far more embarrassing, however, is what was written in the American Thinker piece:

This report may represent the third time that NASA’s DR. James Hansen, Al Gore’s point man on his AGW hoax, has had to backtrack on his claims that humans are responsible for climate change.
…
Could Dr. Hansen’s Reign of Error as head of the Goddard Institute for Space Flight be coming to an end?

To say that American Thinker is confused is to be generous. Hansen runs the NASA Goddard Institute for Space STUDIES at Columbia University in New York City, not the Goddard SPACE FLIGHT CENTER in Greenbelt, Maryland. American Thinker must have been in such a hurry to slam Hansen that they forgot to check their facts.

Just a hint, guys – getting your facts this wrong doesn’t do your already nonexistent credibility on this issue any good.

(For the record, the latest science supports the idea that part of climate disruption is natural, so anyone who says that the sun has some impact is entirely correct. However, anyone claims that the sun is the dominant factor over human emissions of greenhouse gases is incorrect. In fact, we know that solar energy output can’t be the dominant factor – if it were, then the stratosphere would be heating up, but instead it’s cooling off as energy from the surface is prevented from entering the stratosphere by greenhouse gas buildup in the troposphere.)