Ambivalent and pessimistic: on Waxman-Markey 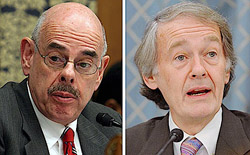 I don’t know what to make of the monstrosity that is the Waxman-Markey American Climate, Energy, and Security Act (ACES) that just passed the House Energy and Commerce Committee (E&C). It’s nearly 1000 pages long and initially faced at least 449 Republican amendments. It’s a mess.

After thinking about it for a while, I’ve concluded that it’s just not worth driving myself crazy trying to determine whether ACES is “better than nothing” or whether it “sucks so bad it must be killed.” We’re less than a week into a process that could make ACES unrecognizable by the time it’s done, and so tearing my hair out over whether it’s enough today is an exercise in futility.

The GOP wants this bill dead – just looking at the insane list of amendments the GOP offered makes that abundantly clear. There’s seven supposedly different “jobs offramp” amendments job counts for Colorado alone, eight for California, five for Kentucky, and so on – all of which would automatically shut down the law if 1000, or 2000, or 10,000 or more jobs were lost in a state as a result of ACES. These aren’t serious amendments in the spirit of “lets make this bill better,” they’re “poison pills” specifically designed to make the bill so stupidly bad that even Waxman and Markey themselves would vote against it.

The fact that the GOP wants ACES dead is a good thing, actually, just as the fact that Greenpeace can’t support it because it doesn’t go far enough is a good thing. Generally, I figure that if both the left and the right hate the same legislation, that’s probably a good sign that the bill strikes the right compromises.

But this time I’m not so sure.

You see, the bill as it is today is almost certainly as strong as it’ll ever be. After passing E&C, it’ll probably go on to Ways and Means since that committee has jurisdiction over government debts, tariffs and so on. After Ways and Means, however, ACES may go through any or all of the following House Committees: Agriculture, Appropriations, Budget, Foreign Affairs, Natural Resources, Science and Technology, and/or Transportation and Infrastructure. Maybe those committees offered their input between the draft hearings and the official introduction on March 18, but then again maybe not. I certainly hope so, considering how much weaker the introduced version of ACES is than the initial draft version was.

And that’s all before ACES hits the House floor, where anyone who hasn’t already offered amendments on it will have the opportunity to do so in an attempt to weaken ACES even further.

Then the bill hits the Senate. Does anyone really think that, after going through as many as ten more committees, ACES will be strengthened in the Senate, especially given the number of conservative and moderate Democratic Senators that have to be mollified to reach a filibuster-proof 60 vote majority? If you do, I’ve got an collateralized debt obligation you could take off my hands too. (The ten committees I think could have jurisdiction over ACES are as follows: Agriculture, Nutrition, and Forestry; Appropriations; Banking, Housing, and Urban Affairs; Budget; Commerce, Science, and Transportation; Energy and Natural Resources; Environment and Public Works; Finance; Foreign Relations; Homeland Security and Governmental Affairs.)

After some form of ACES passes both the House and the Senate, there will almost certainly be a conference committee to work out the differences. It’s theoretically possible that the bill could be made stronger here using the same kind of bullshit measures the GOP used to screw with legislation during the Bush years, but I doubt it. Not because I think the Democrats too moral or ethical to try the same tricks, but rather because doing so will probably make the final form of ACES unpassable in the Senate.

And so, when all is said and done, the ACES that gets to President Obama will probably be even more bloated than it already is and will probably be significantly weaker than the version that just passed out of the E&C committee.

Whether I’ll support it by that point is impossible to predict. Will it still be better than nothing? Probably. Will it still be woefully insufficient as compared to what the science says is necessary? Almost certainly.

So I’m taking a wait and see approach. If ACES stay’s in the “better than nothing” column, great – I’ll publicly support it and suggest that everyone else do the same as well. If ACES finds its way into the “sucks so bad it must be killed” column, however, I’ll publicly oppose it and suggest that everyone else also do the same.

Until then, however, writing letters to your congresscritters asking them to strengthen ACES is probably a good idea. After all, there’s definitely a very slim chance that I’m totally off base and the bill can be made stronger through the legislative process instead of devolving to the least common denominator as I expect.