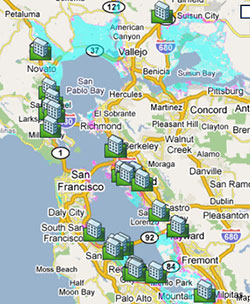 Limit development in low-lying coastal areas. Consider abandoning existing development in coastal areas likely to be affected by sea level rise. Require structures built along the coast to be able to adapt to higher sea levels. Discontinue federally subsidized flood insurance for existing property in low-lying coastal areas. Those are some of the recommendations made last week in the first report by California’s Climate Action Team and reported by the LA Times.

According to the LATimes article, the state of California has concluded that it’s best to plan now for rising sea levels in the future. And so the Climate Action Team is preparing 40 different studies into adaptation and mitigation strategies for the state, many of which are presently undergoing expert peer review, and plans on submitting a comprehensive report to the Governor later this year. The changes already proposed in this one report, however, are radical compared to what most states have been willing to consider to date. Most states have their heads in the sand over the issue of climate change, and while few states have as many different climates as California does (coastal, desert, mountains, etc.), all states will be affected sooner or later, to some greater or lesser extent.

Furthermore, if California is seriously considering abandoning coastal properties, shutting down and moving inland power plants and water treatment facilities and hospitals (like those shown in the image above), and forcing ports to build so that a meter or more of sea level rise is no big deal, then other states will begin to take this seriously as well. Some entire towns may have to be given to the Pacific, something that, until this report, I’d only seen seriously discussed in government circles by the English. And every time I’ve heard it suggested that maybe parts of New Orleans shouldn’t be rebuilt or that homes and towns in flood plains should be abandoned instead of rebuilt by taxpayer-funded federal flood insurance, people’s hackles rise in a hurry. Having the state of California suggesting these approaches as a “good” adaptation strategy truly is radical.

I have one major concern, however. The LATimes article points out that the Climate Action Team is using the IPCC 2007 Fourth Assessment Report as their baseline, but as I reported in the last week’s Carboholic, the IPCC predictions were overly conservative. So planning for a worst-case sea level rise from the IPCC estimates is already a case of too little, too late. So if the report proposes that 1100 miles of levees, built for $14 billion and with a yearly maintenance cost of $1.4 billion assumes 1.5 meters of sea level rise, what happens to the cost if that goes up by double, as several papers presented at the Climate Change Congress in Copenhagen say it will? If nearly half a million people will live in flood plains by 2100 at the IPCC estimate, how many more people will be affected?

The gist of the recommendations in the report are ultimately going to stand regardless. As Mary Nichols, chairwoman of California’s Air Resources Board, was quoted as saying:

“The recommendations are sensible: Defend what is worth protecting, move what can reasonably be moved, try to avoid doing further harm, consult affected communities, prepare to respond to emergencies.”

It’s hard to argue with those.

“Virtual” water exports a problem for Australia and the world

Everyone knows instinctively what water is and what you use it for. You turn on your tap, flush your toilet, drink a bottle of “spring” water, water your lawn, take a whitewater ride down rapids, go fishing in a reservoir – all of that is a use of water. So are the flowers you buy that were imported from Africa, or the shirt you wear that is made from Australian cotton or wool, or the lettuce on the salad you eat during December that was grown in the Imperial Valley of California. The difference is that this water is hidden, or in the parlance of an article from The Age, it’s “virtual” water. And environmental scientist Tim Jarvis is of the opinion that arid and drought-stricken Australia should export less of it’s virtual water.

“Australia is a massive net exporter of virtual water, in other words, water we take to grow crops that we grow for export, such as wheat, rice, cotton,” Mr Jarvis said.

“We have to address this fundamental discrepancy that exists between the fact we’re the driest country yet we’re one of the largest net virtual water exporters,” he said.

Jarvis’ comments about the export of virtual water applies far beyond Australia’s borders. California’s Imperial Valley is desert made ideal, year-round farmland through massive canals importing water from the Colorado River. That water is then exported to the rest of the United States, even those parts that have far, far more water than the desert southwest and the Mojave (which the Imperial Valley would very nearly be without irrigation). Ethiopia exports to Europe so that Europeans have fresh flowers year round, but those flowers contain huge amounts of water that could become quite scarce if Africa dries out as anticipated in the coming decades. Every agricultural product has a cost in virtual water that is used to produce the product, and that virtual water is exported and imported around the world. And this doesn’t even begin to take the huge water costs of resource extraction (settling ponds), energy production (fly ash ponds, steam turbines, and cooling), and even bottled water from overseas (Fiji, Switzerland, et al).

Water will eventually become a valuable commodity world wide, instead of the nearly-dirt-cheap resource it is today. When this happens, cities in deserts (Las Vegas, Phoenix, Los Angeles) may find themselves without enough water to survive, at least at today’s population, without spending great amounts of money to import water. And regions that have sufficient water will have to fight off dryer regions that have designs on their water – some regions (like the Great Lakes) have already had to take action to prevent water from leaving the drainage.

What happens then is anyone’s guess, but resource conflicts over access to potable water aren’t outside the realm of possibility. Neither are mass migrations and environmental refugees from hot, dry areas to cooler, wetter areas – and all the cultural and social ramifications that such migrations bring with them. Which is why international diplomatic meetings like the World Water Forum, meeting in Istanbul this week, are so important.

Alternating current (AC) has historically ruled electricity transmission. Because AC transmission enables the use of transformers to change the voltage from tens or hundreds of thousands of volts to 240 or 120 volts, it’s used all over the world and has been since the early 1900s. But AC is not the only game in town – direct current (DC) lines exist and are used in certain specific applications. For example, because DC lines have lower losses, they’re used to transmit electricity over extremely long distances. In addition, because different regional electricity grids are out of phase with each other, DC lines (which have little or no phase at all) are used to connect different regional AC grids to each other.

The New Scientist had an article last week on recent developments in high voltage direct current (HVDC) transmission lines. The article reports that there are a number of new HVDC lines being installed internationally, such as a 6.4 gigawatt, 2000 km long line from the Xianjiaba dam to Shanghai in China.

Perhaps more interesting, however, is the idea of the “supergrid,” where HVDC lines are used to interconnect entire continents with electricity so that electricity created in one place (such as solar power in the U.S. desert southwest or the Sahara Desert or wind power from offshore wind farms in the windy North Sea) is available wherever it’s needed, no matter how far away that electricity is used. Not only that, but because HVDC lines are much less wasteful, huge gains in effective electricity production could be realized through improved transmission efficiency.

Perhaps the most interesting part of the article, however, is an analysis that was performed by Gregor Czisch, an independent energy consultant who calculated that a $1.8 trillion investment in building a HVDC network in Europe would be enough to power the entire continent with renewable energy exclusively. This sounds like a lot until you consider that it’s only about 10% of what European utilities are already expected to spend on power plant construction by 2030. And the article claims that Czisch calculated that the completed grid could deliver 100% renewable electricity for less than 5 cents per kWh.

There remain some technological challenges – there’s no such thing as a high power DC circuit breaker at the moment, for example – and NIMBY politics will always play their part in anything as major as tens or hundreds of thousands of miles of new transmission line, but there are no technological or political problems that appear insurmountable at this time.

According to the Boston Globe, scientists at MIT have developed a new electrode that enables a lithium-ion (Li-ion) battery to be fully charged 100 times faster than existing batteries. These new batteries, if commercially viable, could charge a cell phone in mere seconds, a laptop battery in less than a minute, or a plug-in hybrid/fully electric vehicle in mere minutes, instead of the hours that existing batteries require. This does assume that you have a sufficiently robust connection to the power grid that you don’t blow the main circuit breaker on the house every time you try to fast recharge your plug-in Prius.

At least two companies, A123Systems and Umicore, have already or are considering licensing the technology for commercialization.

One of the major problems with biodiesel is that it gels in the cold, turning into Jello® in the gas tank instead of flowing through fuel lines like petroleum-based diesel does. This problem has limited its usability in the winter and in cold environments in general. But according to the NYTimes blog GreenInc, Integrity Biofuels of Indiana may have solved this problem, and to prove it, they drove biofueled trucks in Alaska in the winter and ran a diesel electric generator down to -24 degrees Fahrenheit overnight without any problems.

The reason that biofuels gel at low temperature is that there are too many saturated oils, but Integrity has used urea to separate the saturated oils from the unsaturated ones, enabling them to create blends that should run down to -60 degrees F before turning into a gel. According to the GreenInc article, the cost of the reusable urea additive is about five cents per gallon.

While biodiesel has the same problems that any biofuel does, namely the conversion of food-producing farmland to produce fuel crops and questions about energy efficiency, biodiesel has one significant advantage – biodiesel can be made from used cooking oils harvested from the grease traps and fryers of tens of thousands of restaurants around the country and the world. Whether there’s enough used cooking oils to make a dent in diesel consumption is a question I haven’t investigated, but turning a waste product that was once landfill bound into a viable and environmentally-friendly product is always a good idea.