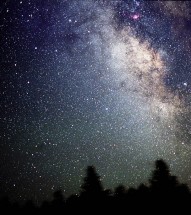 In my 40+ years of life I’ve thoroughly enjoyed many genres of music, everything from ambient to thrash, bop to opera, bluegrass to prog. I like anything that moves me. Variety, spice, all that.

But in recent years I’ve become quite fixated on one particular kind of sound: space music.

I’m fortunate to live in such a beautiful state as Colorado. On a clear night, especially when camping high in the Rockies, you can see more stars than you might’ve even guessed were there, especially if you’re city folk. As you’re gazing into the night sky, it’s not out of the ordinary to see a multitude of shooting stars or even a satellite float slowly by, made visible by reflecting sunlight just as the moon does. Throw in a crackling fire, some grilled vittles, and a few ice-cold local microbrews, and what could possibly be missing?

Only one thing, for me anyway: cosmic tunage. (My five favorite space tracks are at the end of this post.)

I’m pretty certain my obsession with space music began with early listenings to the famous syndicated radio program Hearts of Space, which has been on the air since 1973. Throw in childhood memories of Carl Sagan tripping happily at the controls of spaceship Cosmos, Leonard Nimoy spooking the crap out of me with UFO tales on In Search Of, and repeated viewings of the movie masterpieces Close Encounters of the Third Kind and Blade Runner–all with wonderful, elegant, electrical sound portraits in the background–and it’s not hard to understand that as forward-looking and futuristic as space music is, for me it’s also a heady nostalgic timeslide.

The genre is wide and even the definition rather broad; but suffice it to say that space music is generally keyboard-based (heavy on effects), loose in structure, and sans lyrics. It’s often categorized as a subset of new age music, though I’d argue it predates it. It can inspire a range of feelings: awe, dread, relaxation, melancholy, jubilation, nihilism.

Some artists feature guitar, percussion and even voice above the usual banks of keys. Other very talented virtuosos have even effectively brought unexpected instruments into the mix, such as violin and didgeridoo. (An excellent info source of space music, complete with links to artist bios, discographies and sound clips, is at allmusic.)

Elements of space feature prominently in many other families of music, from jazz to rock to avant-garde, but that discussion’s for another time.

Here are my five favorite pieces of space music from decades of listening, listed by artist, song title, album and year of release.

5. Tomita: “The Hollow Vessel Called the Earth” (The Bermuda Triangle, 1978). You’ve heard Japanese artist Isao Tomita before, though you might not realize it. It’s his interpretation of Debussy’s Arabesque No. 1 that you hear as the theme of PBS’s longtime TV series Star Gazer. The man has a long, strange, wonderful catalog of electronica, and a recurring theme for him is extraterrestrial life. For me, this particular piece evokes being lost in the shadowy mazes of some enormous, drifting space colony (i.e., Earth).

4. Jean-Luc Ponty: “Wandering on the Milky Way” (Imaginary Voyage, 1976). Ah, Monsieur Ponty… he’s one of my absolute favorite musicians of any genre. He’s improvised with Frank Zappa, jammed with John McLaughlin, and funked out with Stanley Clarke; not bad for a guy playing an electric violin. It was hard to just think of one gem of his, and in a longer list his works would appear many more times (such as “Cosmic Messenger,” “Solitude,” “Eulogy to Oscar Romero”) so I figured I’d start with one of his earliest and most memorable solo space flights.

3. Vangelis: “Blade Runner Blues” (Blade Runner, recorded 1982, released 1994). The greatest track in the greatest movie I’ve ever seen. Greece’s Evangelos Papathanassiou was never better than on this brilliant and memorable collection of song stories, and “Blues” is his masterpiece: a noirish, pensive, reflective moment in futuretime. There’s an extended version of it worth tracking down, as well as an interesting interpretation by the New American Orchestra. Vangelis released further music inspired by the movie in 1997.

2. Steve Roach: “The Return” (Dreamtime Return, 1988). Goodness, where to begin (or end) with Steve Roach? The indefatigable maestro of sweeping, ambient spacescapes has so many gems to choose from, I was lost while writing this in a deeply satisfying review of many of them. Although his ominous “The Grounding Place” and celebrated meditation “Structures from Silence” are fond favorites, I had to go with this hypnotic channeling of Aboriginal spirituality with its dramatic tonal change in the middle. It’s a powerful sonic exploration of space, time, and purpose.

1. Giles Reaves: “Suspended… On a Sea of Glass” (Sea of Glass, 1992). This miraculous composition is the pinnacle of Reaves‘ all-too brief catalog of works, which includes other acclaimed albums such as Wunjo and Sacred Space. There is nothing else I’ve ever listened to that better accompanied stargazing (or daydreaming) than this multi-layered, celestial, cerebral magnum opus, a cornucopia of sound that requires–and rewards–repeated listenings. It’s the electronic equivalent of Yes’ awe-inspiring “Awaken.” It’s music Sagan could smoke a bowl to.

I freely admit that I’ve not yet heard all the acknowledged milestones of space music, nor much of its latest and greatest, and I’ve missed plenty of episodes of HoS. But that just leaves me more to explore and that’s at the heart of this journey anyway: discovery. So I welcome suggestions and would love to read about your own favorites and related recollections.