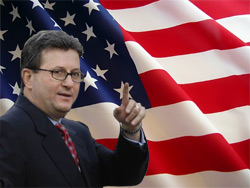 Dr. Slammy offered up some thoughts the other day on Joe Nacchio, the prison-bound former CEO of Qwest. For the good doctor, the case is both public and personal. For my part, I don’t know Joe, but do take some satisfaction in the knowledge that he’s going to Hell. And yes, I do have insider knowledge on that subject.

The most fascinating thing about Sam’s post, though, was what happened in the comment thread. I call your attention to comments #3, 6 and 23, in particular, whereupon we’re asked to believe that Joe Nachhio is not a criminal, but is instead, as Slammy put it in comment #5, “Thomas Motherfucking Jefferson.”

It has been observed before that you Americans suffer from an extraordinary case of Either/Or-itis. That is, everything is black or white. You can’t have it both ways, you know. You’re either with us or against us. There are two (and only two) sides to every story. And so on. It’s as though there were no such thing as gray. As if there’s no such thing as a both/and situation. As if when two people are arguing, one of them must be right and the other must be wrong.

Of course, there’s not really a disease called Either/Or-itis. I made that up. Based on the level of “thinking” that sometimes finds its way into the comment threads around here from people who really should have studied harder in school, I figured I better make that clear before somebody turns the DSM inside-out and then trots back proudly, like a spaniel with a turd in its mouth, to announce that “A-HA! THERE’S NO SUCH THING AS EITHER/OR-ITIS. YOU’VE BEEN PWNED!!!!! ZOMG!!!!!” No, the real term – the actual Latin, medical term, is “stupid.” Sorry for the confusion.

So, on the question of the Nacchio case, let me offer the following observations. I will try to use short words and simple sentence structures so that the laggards can follow along.

1: Yes, Nacchio was right in refusing to cooperate with Bush’s illegal wiretapping program. Yes, Qwest was the only major telco to tell BushCo to fuck off, and yes, they were legally and morally correct to do so. Whether Joe did this because he’s America’s only true champion of liberty or because he wanted to cover his ass we’ll never know, and frankly it doesn’t matter. With a guy like Nacchio, you take the fact that he got one right for the divine blessing that it is and don’t ask a lot of questions about motivation. Right for the wrong reasons still beats the hell out of wrong for any reason.

2: Was Nacchio’s investigation and prosecution the result of Bush/Rove payback? Perhaps. I mean, it’s not like the Crips who formerly ran the White House don’t have a track record, and it’s very easy to believe that Nacchio was the subject of selective enforcement. And yes, selective enforcement is a bad thing because the law ceases being a tool for the defense of the people and becomes a weapon serving the despotic whims of the powerful. That cannot and should not and must not be tolerated.

However, here is where our chimp-with-broadband friends do the thing that people often do when their education has carried them a certain distance down the path toward wisdom, then dumped them by the road a few miles short of town. The common phrase, I believe, is “know just enough to be dangerous.” Put simply, these folks have taken bits of evidence and drawn all the wrong conclusions from them because they’re incapable of critical thought.

Here’s what I mean.

3: Those defending Nacchio do not say, because they can’t, that he is innocent of the charges brought against him. There is no credible argument, anywhere that I have read, that Joe didn’t do that of which he was accused and convicted. So those valorizing him must be arguing … what? That it’s okay to rape the lives of countless thousands so long as you stand up to a corrupt administration? That if you’re right on one issue you’re therefore automatically right on all issues? That human beings are black or white, good or evil, saints or sinners, and nothing in-between?

The equation, here in Either-Or-land (sorry, made that up, too), goes like this. Nacchio was on the other side from Bush. Bush is evil. So Nacchio is, by definition, an angel. Hmmm. Let’s test that theory, shall we? How did Osama bin Laden and Bush feel about each other? So this means bin Laden is an angel, a patriot, a true hero for freedom! Right? Right?

4: If only one of the guilty was convicted, that doesn’t mean he/she should be let go. It means that the rest of the guilty should be rounded up and convicted, too. This is the most baffling part of the whole cluster-thunk. Imagine that there are five serial killers terrorizing the city. The local PD targets, captures and convicts Killer #1 because one of his victims was the police chief’s daughter, and for some odd reason he took it personally. But they don’t go after the other four.

What our friends in the comment thread are essentially arguing is that we should let Killer #1 go because the city’s selective pursuit of him makes him either innocent or a hero. Or both.

No, fuckwits, wrong conclusion. The correct answer is b) now that you have Killer #1 locked up, go get Killers #2-5.

We know thinking is hard, but we ask that you at least try. If you think you’re thinking, but you aren’t sure, here’s a quick test you can take right there where you sit.

Q: A man commits a variety of frauds, in the process destroying the pensions of thousands of innocent workers. Is this man:

If you answered (a), it’s back to the books for you.

In the meantime, we have laws against driving while drinking but not commenting while stupid. So at least you won’t have to share a cell with your buddy Joe…