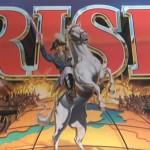 Our illustrious leadership is haggling over the super-sized bailout like it was the end of the world.  My god, do you know how much money we’re talking about?  Actually, i do.  It’s roughly equal to what the Department of Defense spends every year.  And for those kind of duckets we get our ass kicked by guys wearing dress shoes without socks.  To make matters worse, we’re going stone broke in the process of losing to pick-up teams.  We can call ourselves the Harlem Globetrotters all day long but that don’t make it so.  I have no use for the American Empire, but if an Empire it shall be does it have to be such a half-assed failure of an empire?

All this talk about getting back to the central front in the War on Terror (or War for Empire) in Afghanistan and today the Pentagon says that they don’t even have a plan.  What kind of self-respecting empire can’t even come up with a plan?  But that’s that problem.  There never has been a plan.  During the Cold War it looked like there was a plan: keep the Soviet hordes at bay.  Never mind that the whole thing was a sack full of lies from the beginning, at least it looked like a plan.

When the evil Soviets finally gave up trying to destroy us with their inferior military, political system and economy we had an opportunity to make the choice of disbanding the empire.  We even could have made it look like magnanimous victory.  But the mandarins all got a hard-on over Fukuyama’s senseless argument about history ending; Huntington talking through his rectum about civilizations clashing; and Friedman’s ass-hatted, benevolent economic dictatorship of the planet theory.  It wasn’t that the arguments were good, because they weren’t.  It was that certain people wanted to believe the arguments so they did.

Well, history didn’t end after all…who could possibly have seen that coming?  Civilizations have clashed, if you insist on calling them that, but that’s bound to happen if you go around trying to take over other people’s civilization.  And the financial alchemists’ successful transmutation of gold into lead has left only Friedman believing his own drivel.

Empires are built to fall, and the only way out is to believe that your empire is exceptional.  That’s one thing America has down pat about empire building.  Our empire cannot fall because America is different, special and indispensable.  Which happens to be what every empire says about itself, and the closer the empire gets to falling the more the exceptionalism argument gets trotted out.  But they all fall eventually, no matter how many times you tell yourself that it can’t happen.

Knowing all this, i still have to accept that America may have been destined for building an empire.  At a certain point the vigor of national youth ebbs, but if the nation was smart and lucky that vigor was built into power.  If you’re going to go down eventually anyhow, you might as well take a stab at owning the planet, right?  It’s not really my thing, but i could have gotten behind it under the motto of “Fuck it, why not?”  We all could have gotten nice uniforms and had house slaves imported from exotic locals.  It could have been great.

It isn’t because we’re the most bumbling, inept, pansy-assed empire the world has ever seen.  Dudes without socks aren’t even afraid of us.  The only people who might actually be afraid of us are our friends.  China, Russia, Iran…they’re not afraid.  They aren’t lining up to take a shot as us because they know that it isn’t necessary.  It’s easier to watch us bleed to death from multiple gunshot wounds to the foot than to try and knock us off the top of the hill.

We’ve bankrupted ourselves in a back assward pursuit of global domination that has failed miserably.  The mightiest military in history (or so i’m told) to the tune of at least $850 B per year and this is the empire we get for it?  I’m not looking forward to the fall, even if we do deserve it.  But i can live with the fall as a natural course of history.  What i can’t handle is the embarrassment.  Someday historians are going to make snide jokes about the lifespan of the American empire just like they snicker every time they read, “The Thousand Year Reich.”

And, no, it isn’t going to get better.  Obama is obviously on board with the plan and ready to draw a crude smiley face on it as disguise.  He is, however, probably going to be the worst in a line of progressively foolish emperors…if only because he’s broke and losing from the start.  More importantly, he suffers from the delusion that he can use the empire as a force for good and change it a little around the edges.  At best he’ll be able to hobble it along if he gets all that money.  But blowing money on an ineffectual empire is the fundamental problem.

Shoot the wounded beast.  Put it out of its misery.  And do it soon, regardless of draw down looking like the defeat that it is, because the empire that falls rather than dismantles itself leaves a failed, wreck of a nation behind.

Note: This isn’t about the boots on the ground.  Soldiers get trained, equipped and ordered from above.  All the bravery and fighting spirit in the world means diddly squat if the suits and stars from on high are enamored with auto-colonoscopy.