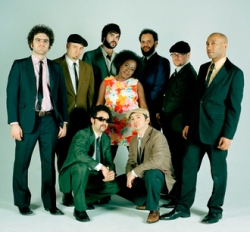 If you pay attention to my music entries, you may have noticed a recurrent theme. It seems a lot of the bands I hear these days, many of which I really like, remind me of bands from the past. Like The Mary Onettes:

I recently tripped across one such example, Sweden’s The Mary Onettes. They can’t seem to make up their minds whether they want to be The Church, Echo & the Bunnymen, or maybe something along the Joy Division/New Order continuum.

In a nutshell, The Flaws are [Joy Division] meets The Killers with a smattering of Johnny Marr. Achieving Vagueness isn’t achieving anything terribly innovative, but the songs are compelling and the execution is more than accomplished. Great CD for the indie crowd, and I suspect a lot of people who grew up in the ’80s are going to like it, too.

And the recently noted M83:

And The Killers and Franz Ferdinand and She Wants Revenge and The Gaslight Anthem and, I imagine, a couple dozen others I’ve written about over the past two or three years.

Part of what drives this is necessity. Since most people haven’t heard the bands I’m talking about – radio and the recording industry have made certain of that – there’s a need to triangulate, to relate the music back to something the reader might know. It’s kind of like giving directions: “you go up the road until you get to Velvet Underground. Take a left, go about a half a mile and you’ll see Genesis off to your right. Just past that you’ll come to where Bob Dylan and Kraftwerk fork. Stay with Dylan, and about two miles down the road you’ll hit Britney Spears…”

Still, it’s like Billy Joel famously sang: “There’s a new band in town / but you can’t get the sound / from a story in a magazine / aimed at your average teen.”

The Sincerest Form of Flattery…

Being a writer myself, I obviously care about influence, and as Russ’ series over the past week makes clear, most of my colleagues here at S&R are keenly aware of who they’re riffiing on, as well. It’s important to know a bit about the history of whatever genre and form you’re mining because the path to greatness often begins with us walking in the footsteps of those who came before.

Just about every artist, early on in his or her career, goes through a period of sincere imitation. For me it was mostly Eliot, and for the masters of British Blues Rock it was old American Blues artists like Robert Johnson, Howlin’ Wolf and Muddy Waters. (Eliot himself wrote about “Tradition and the Individual Talent,” although what he’d think about its application to followers of Joy Division is hard to say.)

But, as I’ve noted from time to time, there’s a line between influence and imitation, and no matter how much we may like a band that’s captive to the influence of its heroes, we have a hard time respecting them critically. Yeats had a word or two on the subject, writing from the perspective of the artist being imitated, and it wasn’t flattering:

You say, as I have often given tongue
In praise of what another’s said or sung,
‘Twere politic to do the like by these;
But was there ever dog that praised his fleas?

The greats in rock history, as in every other art form since cave paintings, have been bands and artists with identifiable influences that they transcended in some way. Not that they always surpassed the bands that preceded them in quality, necessarily, but they internalized and overcame the influence. They took those sounds and made them their own. In VAST (a great band that most of our readers probably don’t know) you can hear U2, but you’d never accuse them (him, actually – VAST = Jon Crosby) of imitating. In U2 you can hear The Beatles, but that influence is hardly the defining essence of the band. In The Beatles you can hear echoes of Carl Perkins and Chuck Berry and Elvis and so many more, but no one in their right mind would argue that The Fabs weren’t truly “original,” whatever that means.

Walking in Your Footsteps

Which brings me back to today, where I think I hear more and more bands settling in and making a permanent camp in the aforementioned footsteps. I’m not talking about all bands, of course. Some of those I like and respect the most have, like the greatest artists in past generations, learned from the masters and established themselves as emerging stars in their own right. The Killers, about whom I’ve written multiple times, and Franz Ferdinand and Interpol. Rob Dickinson, who gave us my pick for 2008’s CD of the Year. Jets Overhead, who are ready to release what I expect to be one of the best of 2009. Death Cab for Cutie, and maybe after another CD or two a guy who born into a very long shadow, Dhani Harrison of thenewno2.

It just seems to me that there are fewer of these and more of those, the ones who don’t transcend, who don’t outgrow the imitation stage, than there once were. But maybe this is a faulty perception on my part? Since I hear so many more bands now than I did back in the days when radio dominated our consciousness, maybe I’m being misled by the basic nature of the industry. Maybe it’s as it always was, but the old structure filtered out more of the noise?

Could be. Hard to say.

In any case, what does this mean for our relationship to acts like Duffy, Sharon Jones & the Dap-Kings, The Chevelles and The Bellrays, bands that aren’t terribly worried about doing anything new, but which are instead committed to doing the hell out of things that have been done? From a critical perspective, will it ever be possible for me to say that a band like The Dap-Kings has given us the CD of the Year? A lot of criteria have to be considered, and innovation is one of them, right? If that doesn’t matter, then there are Holiday Inn bands out there who have to be taken seriously, right?

How Many Southerners Does It Take to Screw in a Light Bulb?

I’ve spent a ridiculous amount of time and money on music over the past 20 years. I own 1500 CDs or more – I lost count a long time ago – and have gotten rid of at least a couple hundred more. In a given year I at least sample 100-200 CDs, maybe more. And one of the things I’m always listening for is the next big thing. What will be the new sound, the modern-day analogue to “Good Golly Miss Molly” or “Help” or “New Year’s Day” or “So Lonely”?

For years I’ve sort of worshipped at the altar of New Wave because that was a moment of such explosive freshness (I’m talking mainly of 1978-1979 here, and more on the English side of the pond), but in truth a lot of what was best about that period owed its soul to everything from The Who to Buddy Holly, didn’t it?

When push comes to shove, then, the truth is that there probably isn’t anything new out there, nor will there ever be. The sounds have all been made, and what we have come to think of as new is really nothing more than a novel way of combining things – sort of like the musical equivalent of a peanut butter-and-elephant snout daiquiri.

So maybe the answer is that I have become as a geezer, or maybe I’m just the proverbial Southerner sitting around talking about how great the old bulb was. I don’t know. I’m aware of what Howe and Strauss say about creativity in their books on generations, which is that the youth cycle we have now – the Millennials, who are the reincarnation of the GI Generation – are the least innovative of the four. Thus, they suggest, we’re probably entering a period where there’s a greater focus on convention than there is rampant inventiveness. This is an exceedingly broad generalization, of course, but they make the case with compelling evidence. If they’re right, I’m probably going to have to wait another 20 years for the kind of uprising I yearn for.

In the end, I’ll go on liking what I like and listening to everything that strikes my fancy, and of course my quest for the next big thing will continue, probably until the day I die. But my critical faculty, the part of me that wants my mind to love it as much as my ears do, will insist on thinking about things … until the day I die.

When that day arrives, I hope something spectacular, something fresh and unprecedented, is playing…