The Weekly Carboholic: GISS and NOAA expect 2009 to be hotter than 2008 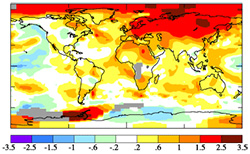 And the National Climate Data Center (NCDC) preliminary analysis of 2008 finds something very similar: 2008 was cool because of the La Nina. But I noticed something interesting in the global data: the RSS/UAH satellite instrument that estimates tropospheric temperature gets corrupted somewhat by the temperature of the stratosphere, and since the stratosphere is cooling as a result of more GHGs in the atmosphere, it’s adding an error to the troposphere measurements. And in fact, when the NCDC had scientists from the University of Washington remove that error mathematically, the RSS/UAH data showed the mid-troposphere temperature tracking along with surface temperatures. The image below shows the differences side-by-side. 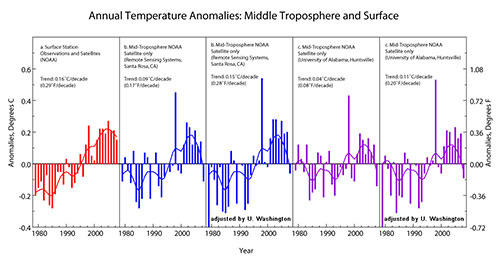 Great Lake rivers have dried up before, may again

According to the paper, scientists have believed since at least the 1960s that the Great Lakes have always been connected to each other via drainage rivers such as the Niagara (which connects Lake Erie to Lake Ontario) even in times when the lakes’ water level was significantly lower than it is today, and thus below the level of the current outlet rivers. The mechanism for this is called “isostatic load” caused by the Laurentide ice shelf at the end of the last ice age. Basically, the ice was so heavy that it weighed down the northern shores of the Great Lakes for a while, possibly enough to create outflow rivers from different places than the current outflows. However, the paper reveals that new data on submerged beaches, silt deposits, and submerged tree stumps all point to the lack of outflows from at least two of the individual Great Lakes (Huron and Michigan), and likely the others as well.

This matters to the future climate because of a couple of things. First, the Great Lakes were once 20 meters lower than modern lake levels, something that would stop the outflow rivers, eliminate water commerce between the various lakes, and cause massive disruptions to cities and communities around the Lakes. As the authors say:

The overall range of monthly water levels in all lakes during the past century has varied by less than 2.1 meters…; yet even this amount of variation causes economic stress.

Stress is right – freshwater intakes for municipal water supplies could be uncovered, shorelines retreat, and so on.

But this only matters if it’s likely. According to the paper, the last time the lakes lacked outflows and were dramatically lower than today was about 8000 years ago, and the climate at that period was much drier – dry enough that the lakes evaporated more water than they received in precipitation. And, according to the paper:

Hydrologic modeling of the present lakes shows that current mean annual precipitation would have to decrease by about 25% in the Superior basin and by about 42% in the Ontario basin, in conjunction with a 5°C mean temperature increase, to achieve lake closure. (emphasis mine)

In other words, a relatively small temperature increase and a long-term drought could do it. And while regional climate models of North America show that the temperature in the Great Lakes region could increase between 3.5 and 5 C over the next 100 years, those same models anticipate an increase in precipitation around the Great Lakes by between 5 and 15%. Unfortunately, though, the models have a significant amount of variation from one run to another, and so range in precipitation from -16% to +15%.

This means that we need to watch carefully how much precipitation actually falls into the Great Lakes drainage basin lest the tens of millions of people that rely on the Great Lakes find themselves suddenly, and literally, high and dry.

Thanks to Dr. John W. King, who was kind enough to provide me with a copy so I could report on his paper

For a website that supposedly prides itself on thinking, American Thinker’s latest foray into climate disruption denialism is remarkably lacking in logic, reason, or science. The author, Timothy Birdnow, takes an amazing scientific discovery of methane plumes on Mars and twists it around to “Mars has global warming, and it’s all the Sun’s fault, so Earth’s global warming must be the Sun’s fault too!!1!” There’s so many reasons why that’s flat out wrong – here’s a few.

First, the two processes known to produce methane are life and volcanism. However, because Mars is believed to be dead biologically and geologically, the idea is that any methane being released today has to have been generated by life or volcanoes millions or billions of years ago. This is the theory that Birdnow latches onto in order to reach his conclusion. But it’s just as likely (and arguably more likely) that there is some residual volcanic activity creating methane – I’ve lost track of the number of times that scientists have been surprised to find weird geology in our solar system on some moon or planet the scientists thought they understood. And there’s a small chance that there may be life on Mars somewhere. So he could be flat-out wrong to start with.

Second, as Jeremy Jacquot at DeSmogBlog points out in his debunking of the Mars methane meme, Mars has a number of factors that make it more susceptible to solar intensity changes than the Earth, not less, starting with a thin atmosphere and a much larger axial tilt and orbital eccentricity that creates greater seasonal variations in weather and whose Milankovic cycles are more dramatic than the Earth’s own. 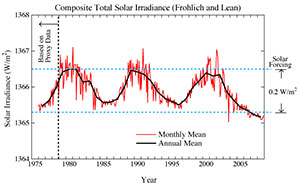 Birdnow suggests, based on the opinions of a poorly informed Russian scientist expressed in this National Geographic news story, that increasing solar radiation is causing Mars to heat up. But we’re at the minimum of a solar cycle (see the image at right) that’s been on it’s downward trend since 2000, and the National Geographic story indicates that Mars has been heating up since 2002 – two years after the peak irradiance of the last solar cycle. So much for that idea.

Furthermore, though, if deniers like Birdnow believe that we can’t possibly know enough about the Earth’s climate, how the heck can they claim to know enough about the climate of another planet, even one as well studied as Mars? If centuries of detailed surface temperature measurements, tens of thousands of temperature proxies, ice cores, aren’t good enough to conclusively say that the Earth is heating up due to CO2 emissions, then there’s no way we’ve got enough data to say anything conclusively about Mars’ climate.

Climate disruption denial increases in 2008, but by how much?

Kevin Grandia at DeSmogBlog ran a post last week about climate disruption denial and how it increased in 2008 over 2007. In part, Grandia attributes this to traditional media being “unwilling to cover the nonsensical junk science of the right-wing think tanks and their cadre of scientists for hire.” There’s no doubt that the ACCCE and other denier groups funded by dirty industries have a great deal of money to throw around, so he’s likely partly correct. But I think there’s more to it than that.

First of all, his searches are probably too broad. For example, Googling “global warming” + hoax turned up 22,077 links in 2007 and 49,719 links in 2008 – but 130 of those links were related to me in some way, shape or form (I tagged “Brian Angliss” on the end of the search and came up with 130 responses). Similarly, 1,120 of those links were related in some way to Grandia himself, either by mention, crosspost, or opposition. In fact, this very post will turn up in that search by nature of the fact I used “global warming” and “hoax” in this paragraph. So it’s hard to know how many of those links are to deniers and skeptics and how many are to people debunking or discussing said deniers and skeptics.

Second, given the fact that 2008 was cooler than 2007, it’s hardly a surprise that the deniers were out in force claiming that the cooler weather means that global warming was bunk. Utter hogwash, but not surprising.

And third, 2008 was an election year, and both President Obama and Senator McCain were talking about climate change, global warming, and CO2 all year long, driving up the number of references on the Internet and via traditional media from 2007.

Grandia is right, however, about how this is troubling given the number of people who get their news off the ‘Net and the results of a Rasmussen poll that found 43% of people attributed climate disruption to “long term planetary trends” instead of human activity (probably related to the 2008 cooling spell again). Given my own recent experience with deniers hitting the top of climate-related Google News searches I have, I am certainly concerned. While I’m not willing to claim that this is the end of the world, it certainly deserves scrutiny at a minimum, and probably a more active approach by scientists and activists to offset the monetary advantages of the ACCCE, Icecap, the CEI, and the Heritage Institute.

I’m always interested in what could be bridge technologies from coal or natural gas to lower-carbon sources of electricity like solar or wind. The problem is that coal and natural gas burn their fuels to boil water to create steam which is then used to drive turbines and create electricity (combined cycle gas plants are similar, but not identical), and many renewable electricity sources produce electricity directly. Which is why a new pilot program by Xcel Energy (disclosure: I’m an Xcel customer in the Denver metro area) to partially retrofit an existing coal plant with solar thermal capacity is so interesting.

Solar thermal uses large mirrors to heat a thermal medium like molten salt. That salt is then piped to a heat exchanger that contains water, turning the water into steam that then drives a turbine to generate electricity. The idea is to build a small amount of solar thermal along side an existing coal plant and to use the steam from the solar-thermal plant to partially offset the amount of coal burned to generate steam.

My personal hope is that this works, but not too well, because a large solar thermal plant alongside existing coal plants would make a good bridge technology. By building alongside existing turbines, the cost of deployment is lowered (win), less coal is consumed (win), the solar displaces coal during the peak periods and baseload is still maintained (win), and a renewable technology is in place to displace a dirty technology (win) when the coal plant shuts down (and after molten salt storage is added). The reason I don’t want it to work too well is because it lengthens the life of coal plants, and that’s a loss. And the fact that Xcel is approaching Colorado utility ratepayers to foot the bill for something that should help them out in the long run isn’t exactly a win either.

According to UPI, a viral disease that was nearly unheard of in Europe before 1990 has now reached epidemic proportions in parts of Europe, and some scientists familiar with the disease are blaming climate disruption.

The reason is that the host for the virus, bank voles, have spread and increased in numbers as the voles’ food supply has increased with the warming summers an autumns. And warmer summers increase the likelihood that people will visit the voles’ habitat for breaks and vacations.

If there’s not some other explanation, then this may join West Nile and a few other diseases that have widened their spread partly as a result of climactic changes around the world.