Price for stress relief continues to go up 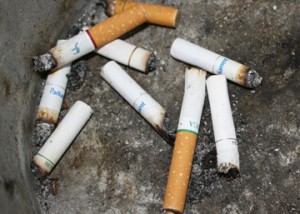 Smoking in New York State isn’t as easy as it used to be. Just ask Jill from Olean.

She smokes a pack and a half of cigarettes every day. Sometimes even more if stress stirs her up. And it’s harder to afford each year.

Jill’s small apartment rests on the corner of a street in Western New York. Waves of smoke and ash loom in the air, rushing to the nostrils and blocking out other scents. Thick chips of paint crumble off the building’s exterior. Pay no mind to the cigarette butts scattered across the lawn.

The flickering light on her aged porch illuminates her pacing profile. She turns and smiles.

Nothing else matters right now. High prices, health hazards, and air pollution don’t cross her mind. The extra buck and a quarter she’s been paying since June bears no importance.

She needs her fix. And she’ll pay the highest cigarette tax in the nation for it.

The smokes are jammed into her front pocket. Wiggling from side to side, Jill eventually frees them and hoists the bundle into her hand. She clasps the front of the pack, flips back the cardboard lid, and slides one cigarette onto her palm.

“I even changed brands this week,” she reveals. “The ones I was buying went up more than the ones [a friend] was getting. So I went to her brand.”

It’s not a premium brand. She can’t buy them from the gas station up the street. Jill sticks with the cheapest brand at the cheapest location for the cheapest price.

A single mom working for minimum wage doesn’t have other options.

She dangles the cigarette between her forefingers as a smokescreen creeps between her lips. No fancy smoke rings. No coughing. It’s strictly routine.

Inhale. Exhale. Just as she has for the past 35 years.

Ten packs of generic cigarettes cost Jill $13.60 this week. She says that’s up almost four dollars from last month. And she can’t recall exactly how much she paid when first starting.

“Maybe a dollar a pack or something like that,” she guesses. “I think I was smoking Dorals. They’re probably about six, seven dollars a pack now.”

But prices don’t matter to her right now. Scrubbing every inch of a four-floor dormitory takes a lot of energy, and she needs to chip away at the stress.

Jill takes one last drag on her cigarette, strolls to the side of the porch, and flicks the butt into obscurity. The flame at the tip of the cigarette fades. Her moment of peace ends.

Then it all rushes back to her – the cost of her habit, price increases, tax raises, the whole lot. No more running from it. Time to delve into her truth, her story.

She opens the door to her apartment and waves into the living room.

Jill plops down on the tattered sofa, brushing aside a nearby ashtray and lighter. She asks her two kids to leave the room, glances at a pack of smokes on the table, and stays silent for a few moments.

But just like every other state smoker, Jill pays more for cigarettes than she did three months ago.

Gov. David Paterson and the state legislature enacted a cigarette tax increase on June 3, effectively raising cigarette prices by $1.25. The bump brings New York’s tax to a grand total of $2.75 a pack – the highest in the nation.

Why force smokers to fork over the extra cash? State officials say they’re just trying to help them quit.

“Raising the prices of cigarettes is one of the most effective ways to get smokers to quit and prevent youth from starting,” says Richard Danes, state health commissioner. “We expect that an unprecedented number of New York smokers will try to quit smoking.”

Jill doesn’t buy that explanation. She says the state is singling out smokers as usual.

“People seem to always pick on the smokers,” she reflects. “Why not tax the beer? The alcohol?”

The state just wants more money, she says. And in the end, it won’t stop adults from smoking.

“They’ve been smoking for a lot of years,” Jill sighs. “They just got it set in their head that that’s just the way life is. They’re just not going to stop.”

New York begs to differ. According to the State Health Department, calls to the Smokers’ Quitline tripled in June. It also says nearly three times more smokers are receiving cessation help from their health care providers.

“We will come closer to our goal of one million fewer smokers by the year 2010 by implementing a statewide push to motivate smokers to quit,” says Ursula Bauer, director of the State Tobacco Control Program.

Regardless, Jill says most smokers will find other ways to afford their habit. Even if it means evading taxes.

“I think [the state] is driving more people to the Indian reservations,” she argues. “That’s what they’re doing.”

Buying groceries, paying rent, and caring for two kids on a little more than $1,000 a month is no easy feat. Jill makes her living working 40 hours a week as a housekeeper at a small university. It’s her seventh year working there, and she intends to stay until retirement.

How could she possibly afford smoking?

Switching to less expensive brands helped for awhile, but the savings weren’t enough. Jill now goes to the Allegany Indian Reservation each week to purchase untaxed, inexpensive cigarettes. She otherwise couldn’t afford to keep up her habit.

“All the girls I work with go down there,” she says. “A lot of people do. They have to.”

How much would she pay for cigarettes if she didn’t buy at the reservation?

When it comes to money, the government lends Jill a helping hand. She relies on her tax return to cover extra expenses such as smoking.

“When I get my income tax, I get pretty good since I have two kids,” she explains. “That money pays for what my bills and stuff don’t pay for during the year. What my wages don’t pay.”

At least for now. That luxury may come and go.

“When the kids are old enough, I’m probably going to have to get a second job,” she admits. “I already know that.”

And what about the smokers without big tax returns? The ones without an Indian reservation nearby? Even Jill admits that the tax increase is too much for them. They must have to quit.

“I would almost say they have to, with it being that expensive and their wages too have a lot to do with it,” she realizes. “If you’re low income and you have kids, you can’t afford 50 or 60 bucks a week.”

Jill’s 14-year-old son sprints into the living room carrying his skateboard in one hand and a bottle of pop in the other. He throws himself down on the couch and kicks his feet up on the rickety coffee table. Richard Smith certainly knows how to make an entrance.

Jill slides over a cushion to make room for her son, scolding him for being too loud.

The sheepish grin never leaves his face. He’s eager to talk about his mother’s smoking habits. And he doesn’t approve one bit.

“It’s bad for her,” he objects. “I used to hide her cigarettes.”

But Richard’s concerns go beyond Jill’s health. He’s old enough to know the value of a hard-earned dollar. He realizes his mother has been paying more for cigarettes with each passing year.

“I think you should quit because there’s more money involved for us,” he tells Jill. “And more money for me.”

Cassidy Smith peeks out from behind her bedroom door and listens in on the conversation, nodding in agreement with her brother. She doesn’t say much on the subject, though.

Richard, on the other hand, hasn’t stopped asking questions since he was young.

“I remember once he came home – he must’ve been in third grade or something – and they’re teaching him that cigarettes are a drug,” Jill recalls. “And, of course, he comes home and then he’s telling his friends that his mom takes drugs.”

“Do you know I had to have a talk with that little boy?” Jill laughs. “You don’t be telling people those things. But I think that’s what did it for him.”

Does Richard still hide her cigarettes?

He stares at the floor, shooting a few quick glances at his mom.

She sighs and shakes her head. Richard just shrugs.

He drops to a whisper.

The Facts of Life

Business comes to an end. The craving sets in.

Jill reaches for the pack of Seneca Cigarettes on her coffee table and makes her way to the front door. One mint cigarette slides out of the pack and into her fingers. It rests between her lips as she fumbles around for a lighter.

The blaze dances in the wind as she gently cusps her hand and calms it. The tip of the flame ignites the cigarette and releases a fog of smoke.

Success. She balances the cigarette between her index and middle fingers, welcoming that first glorious jolt of nicotine.

Inhale. Exhale. Just as she has for the past 35 years.

Inhale. Exhale. Just as she may for the rest of her life.

One glimmer of hope remains. Despite her arguments against the tax increase, Jill says she’ll butt out if prices reach high enough.

“It might be a factor in helping me,” she admits. “I don’t know how I could afford it.”

Until then, Jill continues to feed her addiction one expensive puff at a time.

“I do think cigarettes are a drug,” she says. “Because they’re addicting.”

The flame burns down the smoke’s slender body, slowly reaching its end point. Jill breathes in one last puff, holds it for a few seconds, and blows its remains into the air.

Its final ashes fall to the ground. She flicks it into the darkness.

Alex Cole is a freelance writer and recent graduate of St. Bonaventure University in New York. He currently resides in Syracuse, NY.