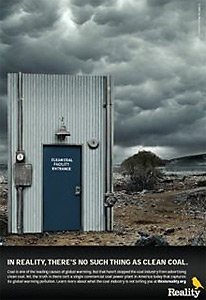 Reality. This is the name of a new campaign by the combined might of the Sierra Club, the Alliance for Climate Protection, the National Wildlife Federation, the Natural Resources Defense Council, and the League of Conservation Voters that was officially launched yesterday. Its aim is to oppose all the bogus “clean coal” advertising that the coal companies, and their mouthpiece the American Coalition for Clean Coal Electricity, are running. It’s called “Reality” because, as the ad says “in reality, there is no such thing as clean coal.”

Here are the campaign’s first ads: the print ad is at right, the TV ad is behind the cut. Click on the print ad to see a larger, readable version. Do the two ads work? Do you get them? Will others? Let us know your thoughts in the comments.