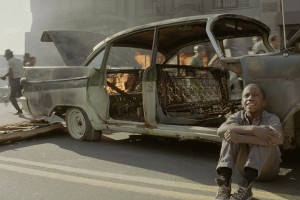 Today, the executives of the Big Three return to Washington to pitch their case for federal assistance.  Presumably they will not be blundering into town on corporate jets.  Whether they will walk away with anything more than a political whipping remains to be seen, though given the current atmosphere they had better expect to be tied to the post.

I’m not an industry analyst, but my great-grandmother swung rear axle assemblies for Chrysler; my grandfather on the other side retired from the FoMoCo; both a brother and an uncle currently work in the industry; and i was raised in a UAW town dominated by three auto plants.  You can take the boy out of Detroit, but you cannot take Detroit out of the boy.  And i can tell you that the bullshit in this “debate” piles up so fast that you’d need wings to stay above it.

First things first, a UAW line worker does not receive $70/hour in compensation.  That number is arrived at by dividing total costs by current employee hours worked.  In other words, it includes all the famed legacy costs.  Whether those legacy costs are good or bad/right or wrong is an issue worthy of discussion; however, placing $70/hour worth of blame on the fat cats assembling cars is nothing but GM propaganda.  Theoretically, those legacy costs were prefunded.  If the company was too short-sighted to plan for the future, that’s a problem…but it is in no way the fault of the current employees.  The new contract sets a starting wage of $14.50/hour, less than what transplant, non-union auto manufacturers pay.  The new contract also puts the legacy costs in the hands of the union starting in 2010.

Is the union lilly white and blame free?  No.  They’ve made concessions of late, but the UAW has done its bit to make American auto manufacturing uncompetitive.  Not one of those contracts was negotiated in “good faith”.  They were all examples of both sides trying to nail the other side to the wall without much thought for the long term health of the company.

American cars have a somewhat deserved reputation for being rolling piles of shit.  That really isn’t true anymore…at least not across the board.  Quality has improved greatly, if unevenly, over the last decade to the point where there is little difference between buying American and buying Japanese.  The perception gap, however, remains.

That perception gap also creates an issue when the discussion turns to fuel economy.  I’ve read several columns categorically stating that Toyota doesn’t produce V8’s.  Apparently these writers have never heard of the Tundra.  The Japanese jumped right on the SUV boondoggle bandwagon.  It’s the market.  All of these companies build the cars that people want to buy, and Americans want rolling houses.

None of these companies have made giant strides in fuel economy over the years.  A 2009 Camry (2.4L, 5 speed manual) gets 21/31mpg according to the EPA.  A 1985 Camry (2.0L, 5 speed manual) gets 25/31.  Twenty four years of technological improvement has produced a net decrease in fuel efficiency.  Modern cars are heavy because the government has mandated safety and the consumer has mandated comfort.  All those silly doo-dads that we can’t live without come with a cost.  They add weight, manufacturing complexity (and hence cost), resource use, and draw energy.

Big 3 management has been atrocious.  They’ve been practicing fealty to the quarterly profits of doom for so long that they probably couldn’t see straight if you hit them over the head with a hardbound copy of The Toyota Way.  Then again, the Big 3 are actually three distinct companies.  According to the suits at the Glass House, Ford only went a beggin’ the first time because it is very afraid of a GM bankruptcy and the havoc such an event would unleash in the supply chain.  Ford is in a much better cash position than GM, and 75% of its next product cycle will be eligible for the already approved $25B in loans for improved fuel efficiency.  It is Ford that has made the greatest gains in quality and safety.  Well into their restructuring plan, Ford says that it only wants the possibility of a bridge loan if the market stays soft.

In 1908, the Flint carriage maker, William Durant founded General Motors.  The numerous badges under the GM umbrella today are vestigial appendages of GM’s evolution.  Durant bought small, independent car makers to build his corporation.  He also lost control of GM on two occasions because he ran the company into massive amounts of debt and then suffered from market collapses.  Sound familiar?  GM has always been focused on short-term profits and has always lacked any sort of conscience.  Flint is a shithole today because GM simply left for greener pastures when it was in the corporation’s best, short-term interests.  GM was deeply implicated in the demise of the electric public transportation network that used to serve American cities.  GM is the company that actually developed an electric car…and then sent them all to the compactor.

Contrast that story to Henry Ford’s founding of the FoMoCo in 1903.  Henry concentrated on building cars rather than building a corporation.  Wall Street chastised him for voluntarily raising pay to $5/day and instituting the 8 hour, 5 day work week.  Productivity soared and his workers could actually afford to purchase the product that they made.  He never had much use for Wall Street anyhow.  If not for a freak fire and the outbreak of WWI, his collaboration with Edison might have brought us electric motoring before 1920.  The man was building bio-polymer body panels in the mid 1930’s and operating his plants with renewable power whenever possible.

Ford is still controlled by the Ford family and it is still headquartered in Dearborn.  The Rouge Complex, Henry’s crown jewel, has recently been revamped at great expense.  The truck assembly plant has 454,000 square feet of living roof and a host of other environmental design facets.  W.C. Ford Jr. felt a commitment to his family’s legacy, the community, and the environment; he did the same thing his great-grandfather probably would have done.

This time around the Big 3 will pitch their cases individually, and we owe it to them to look at the situations on a case by case basis rather than lumping them all together and heaping blame equally regardless of whether it is equally deserved.

We should not throw good money after bad, but we should examine ways to make Detroit more efficient and effective.  Ford would like to bring some of its European line to the States, but the plan is difficult because of differences in safety/crash test standards.  There is no earthly reason why these companies should be forced to work under two different sets of rules.  CAFE should be scrapped and replaced with a gasoline or carbon tax.  Fleet averages are too easy to manipulate and have far too many loopholes.  They are the reason that Toyota can produce a truck that gets 15 mpg and still brag about how “green” they are.  We should mandate that American factories be retooled to provide American jobs and that new facilities should be constructed within the United States.  And money given should be used as subsidies for research and development.  The Japanese jumped ahead in the hybrid game because for a long time Japan payed $20,000/vehicle to make the early hybrids profitable enough for the companies to sell.  We can argue whether that’s right or wrong, but it worked.

One final note.  Keep your eye on GM.  Don’t focus on the outstretched hand; be mindful of what the other hand is doing.  GMAC (which is roughly half owned by Cerberus, the three headed dog of Hades that owns Chrysler) has applied for “bank holding company” status.  If that is approved then GM gets its hands in the TARP cookie jar.  If GMAC gets bailed out, i predict that GM and Chrysler will happily file for bankruptcy.  Whether they will even bother to restructure and still build cars is anyone’s guess, but i wouldn’t be surprised to see them both walk away from the industry and let others deal with the wreckage.

You are free to continue hating on the city that built the American Dream, and i realize that this is mostly about making Detroit the scapegoat for all the fear and loathing that’s piling up in America today.  It may be the nothing can be done because the American Dream is dead.  But Detroit didn’t kill it, we all killed it.  The land of pleasant living keeps hitting the snooze button hoping that it won’t have to deal with the rude awakening that it has in store, and the head snoozers are the same ones railing against “bailing out” the automakers.  What room do they have to talk about mismanagement?  Have any of them looked at the federal government’s books lately?  I have a sinking feeling that my nation will throw my city to the wolves to make itself feel better today.  I can’t say that it surprises me, but it sure hurts like hell.