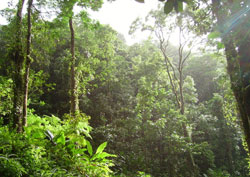 When you put a price on the “services” that forests provide, deforestation costs the world economy between $5 and $7 trillion every year. But when you put a price on those services, and use that financial incentive to provide so-called carbon offsets, the law of unintended consequences reigns supreme. A new study reported in the Guardian shows that those unintended consequences may themselves be hazardous to the environment in other ways than just carbon dioxide (CO2) emissions or deforestation.

As the article says, the idea is to make trees more valuable standing and growing than chopped down and reduced to firewood or timber. The problem is that the supposedly win-win market systems haven’t worked. The article points out that monoculture (single species) tree plantations destroy local biodiversity in the quest for finding fast growing species that, theoretically, soak up more CO2 from the atmosphere. Indigenous people who have been engaged in reforestation projects are finding themselves unable to plant crops or native plants because the local government, more interested in foreign carbon offset investment than in biodiversity, reclassifies the forest in a way that permits it to be logged and then replanted with a tree farm.

If this is what carbon offsets reaps, then it’s hardly any wonder that a growing number of environmental activists oppose the practice.

Salt water marsh restoration may efficiently sequester carbon
Deforestation. Biodiversity. Clean water. Carbon sequestration. Wetlands protection. Shoreline restoration. Most major environmental problems facing the world are connected in some way to other. For that reason, most of the connected environmental problems must be solved more or less simultaneously. Take clean water, shoreline restoration, wetlands protection, and climate change – wetlands are known to efficiently clean both freshwater and salt water, they help restore the shoreline and protect it from storm damage, and, if the preliminary results from a recent U.S. Geological Survey (USGS) hold, they grow fast enough to sequester significant amounts of carbon too. 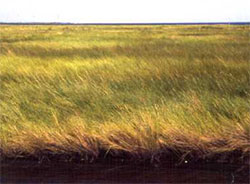 Two months after starting a wetlands restoration research project in California’s Sacramento−San Joaquin River delta, the USGS researchers reported that their project was capturing 30 times the amount of carbon per square meter than Kyoto Protocol-compliant reforested agricultural land. This is because wetlands grow so fast and convert that growth into low-oxygen, slowly decomposing peat bogs and, ultimately, into new land over hundreds or thousands of years. However, freshwater wetlands have enough oxygen in the water to produce large amounts of methane. And since the USGS study hasn’t yet measured the amount of released methane, the total carbon sequestered may in fact be largely or even entirely negated by methane releases.

According to the ACS article, though, salt water marshes don’t suffer from the same problem, or at least not to the same degree. Because the salt water marshes grow as fast as their freshwater counterparts, they sequester as much carbon. But because there’s a lot more sulfate in salt water, bacteria don’t produce methane in significant amounts, and so methane emissions are unlikely to offset the CO2 absorption in the marsh. And as the marshes pull CO2 out of the air, they’ll also clean the water, reduce shoreline erosion, slowly build new land, and provide food and shelter for wildlife.

Shallow ground water modeling shows effects on climate
In an interesting development, a new study reported in Environmental Science & Technology shows that the amount of ground water in a area has an effect on that area’s climate. According to the ES&T article, new modeling based on a watershed in Oklahoma suggests that not only does climate affect the water table, but the water table also affects climate. This feedback effect is produced due to changes in how much water plants suck out of the ground and release into the atmosphere (a process known as transpiration), how river flow changes as a result of water table changes, etc.

Reed Maxwell of the Colorado School of Mines is quoted by ES&T as saying that this new hydrologic modeling will improve climate modeling in general by integrating hydrology and climatology together. However, as there are significant issues with data and modeling of both on similar scales, so it’ll be quite some time before integrated global models are available to climate researchers. 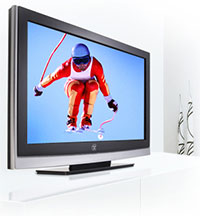 Electronics manufacturing compound a strong greenhouse gas
The Carboholic mentioned an unregulated industrial compound called NF3 used in the manufacturing of liquid-crystal displays (LCDs) back in July. NF3 is nitrogen triflouride, and it’s a potent greenhouse gas (GHG). A new report last week found that the amount of NF3 in the atmosphere is 4.5 times what atmospheric scientists had previously thought, and concentrations are increasing at 11% per year. While the gas is currently unregulated, because of its potency as a GHG and how much of it is entering the atmosphere (16% of the entire global production of NF3, not 2% as researchers had previously thought), scientists are already recommending that it be included in the next climate disruption treaty to be hashed out in Copenhagen in 2009.

While this is certainly important news, it is not, as The Hindu’s headline claims,”NF3 contributes more to global warming than CO2″. This headline goes beyond misleading – it’s flat out wrong. Unfortunately, The Hindu article is the featured article on Google News for this news topic as I’m writing this week’s Carboholic and it has been been for at least two days. This means that there are certainly deniers who have, or will, latch onto this headline and claim that it debunks the whole body of anthropogenic climate disruption science when it does nothing of the sort. In fact, anyone who reads the article in The Hindu will find that the article actually contradicts the headline.

Deutsche Asset Management: climate and financial crises may work together
According to Fortune Magazine’s Investor Daily, the confluence of two crises, one of global finance and one of climate, presents a unique opportunity. Specifically, a recently release report by Deutsche Asset Management (DAM) suggests that companies and governments that are willing to invest in new technology and upgrades will position themselves for a very profitable future.

According to the Investor Daily article, the International Energy Agency estimates that the clean energy market is $45 trillion between now and 2008. This market is regulated and nearly guaranteed as interstate, national, and international agreements are made that will force people to make dramatic changes to how they consume energy in all its forms. And because of all the government support, companies that provide energy efficiency technologies, renewable energy, an so forth have what Mark Fulton, global head of climate change investment research for DAM and primary author of the report, calls “a significant safety net.”

Of course, the article points out that falling prices for fossil fuels may turn the market for renewable energy and energy efficiency on its head even with government support. Unfortunately, as NYTimes commentator Thomas Friedman pointed out last week, the U.S. has been here before – in the 1980s, following the oil embargo. But this time we don’t have the luxury of time, if we ever really did.