Obama's and McCain's spending mismatch, tonight's debate, and why the polls may be underestimating Obama's lead 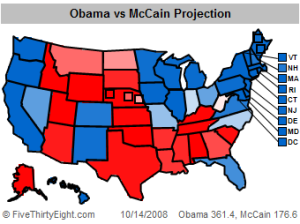 The polls and the debate

Today’s morning polls are out, including the Gallup daily tracking poll.  Overall, it appears that the race may be tightening a bit.  As expected, initial reaction to negative campaigning usually works against the attacker, but continued attacks tend to soften support for the victim.  Negative advertising works and both campaigns know it.  The issue is timing.  McCain may have waited too late, after most people had committed, to launch his attacks.  But maybe not.  Obama has a funny name and he’s black.  It’s possible that white people, who make up the majority of voters, will be more likely to turn on him than they would on a white candidate.

Let’s guess, for just a moment, that McCain’s campaign sees these numbers and decides that tonight’s debate is the time to really push home the Bill Ayers attack, even if they hadn’t already decided to raise the issue in the debate.  How should Obama respond?  Well, keeping in mind that Obama needs to continue looking and acting presidential, and that it appears to be his calm, steady presence that’s winning these debates for him (in the public eye), here’s the kind of response he may deliver.

I’d first like to thank Senator McCain for raising this issue to my face.  It’s been difficult to address it, because I can’t adequately respond to PR and advertising campaigns and anonymous e-mail blasts.  I think John is actually raising two issues, but let me deal with the most immediate one first:  What is my relationship with Bill Ayers?

Bill Ayers is a former Weatherman, a terrorist from the 1960s, who attempted to bomb some buildings in Washington when I was eight years old.  What he did was absolutely reprehensible and criminal.  He could have hurt or killed someone, and we can all thank God that he didn’t.

When I first started getting involved in my community, I was appointed to a board of directors that Bill Ayers was on and met him there, the way I met all the other people on that board.  Subsequently, Mr. Ayers did what many politically active people do at the request of the party:  He held a small fund raiser at his house for one of my campaigns, one of hundreds of small fund raisers held for me over the years and one of millions of such things held for other candidates running for everything from the US Senate to the local school board.  Mr. Ayers lives in my neighborhood of Hyde Park, which is roughly 100 blocks of Chicago.  I don’t recall ever seeing him outside the board meetings and that fundraiser except maybe to see him pass by in his car.  That’s it.

I think what Bill Ayers did in the ’60s was as wrong as it can be, and I condemn it the way I condemn all people who would substitute violence for rationality and hate for reason, and as president, I intend to root them out of the world, whether their names are “Osama bin Laden” or “Timothy McVeigh.”

The second, and larger, issue is about campaigning and negative attacks, in general.  I think it’s true that character matters, and I welcome any questions anyone might have about mine.  But I don’t believe that unfounded attacks are appropriate.  John knows what it’s like to be in public life.  John and I meet many, many people, most of whom are upstanding citizens, but some of whom are bound to be scoundrels just from the law of averages.

For instance, John had a ten-year friendship with Charles Keating, the swindler from Lincoln Savings and Loan who sold worthless junk bonds to investors and cost the US taxpayers billions to clean up his mess.  John took nine vacations with Keating, some of them all-expenses-paid, accepted $112,000 in campaign contributions, and was reprimanded by the Senate Ethics Committee for his part in shielding Keating from federal investigators who wanted to put him in jail where he belonged.  But I just cannot bring myself to believe that John was on the take.  I think he just made a mistake.  I also don’t think he’s a Nazi and death squad sympathizer just because he was on the board of the Council for World Freedom, a front group for Nazis and murderers.  I don’t think he knew about that.  And I don’t think that John believes in election fraud just because he was the keynote speaker at an ACORN convention two years ago.

And I don’t believe that John really thinks I’m a terrorist, or hang around with terrorists, because there’s something morally wrong with me.  He’s said as much on his campaign, calling me a good family man, and I thank him for that.

I do think that John has been misled by his campaign managers who came from the Karl Rove school of “win at any cost, tell any lie.”  And their brand of politics, the politics of George W. Bush, is tearing our country apart.  I don’t think we Americans could ever afford those politics, but we certainly can’t afford them now when we simply must, must work together to dig ourselves out of the worst financial crisis since the Great Depression.

Democrats have long been the ones whose campaigns were under-financed, but not this year.  McCain is being badly outspent in several key states, and is being forced to spend time and money on states like Indiana and North Carolina where most Republicans have won easily in the past.  One place he’s being badly outspent is Northern Virginia, the most populous area of a state he desperately needs if he’s to have a chance of winning.  Check out Jean Cummings’ story on Politico.

Are Obama’s most favorable polls actually the most accurate ones?

One of my favorite election websites, fivethirtyeight.com, has a great story on Ann Selzer, her very high-quality polls, and how those polls are showing an Obama lead greater than most other polls.  Like many pollsters, Selzer tries to decide which respondents are “likely voters” and which are not.  A lot of the current differences in the polls reflects various methods of doing this.

Selzer feels that most polls are vastly underestimating youth voter turnout, especially considering that voters ages 18-29 increased 52% during the Democratic primaries leading up to this election.  That stat would tend to make one think that youth voter participation would be higher this year than in the past, which would favor Obama.