The choices that U.S. consumers make are directly responsible for 37% of all U.S. carbon emissions. Direct emissions include those from residences and personal travel. Additionally, consumers’ choices are indirectly responsible for another 28% of emissions via landfill emissions, agriculture, and commerce. As such, U.S. consumers have some amount of control over 63% of all U.S. carbon emissions, at least according to a McKinsey & Co. study that was reported in the Wall Street Journal this past week.

The essence of the study is this: U.S. consumers are huge consumers of energy as well, more so than anywhere else in the world, and so consumers have a greater ability to reduce carbon emissions here than anywhere else in the world. The problem, however, is cost. It costs money to buy new, more fuel efficient cars, and with our suburban sprawl lifestyles, driving less, carpooling, or using mass transit isn’t always an option. Similarly, more insulation in the walls makes both heating and cooling a residence more efficient, but that also costs money. Of course, if you priced carbon in some way, either via a market mechanism or a tax, then the additional cost would also cost money, and consumers would – in theory if not always in practice – migrate naturally toward the solution that cost the least.

This new McKinsey data tracks closely with a discussion from 2006 I found on Leanardo ENERGY’s Sustainable Energy blog. The blog post discusses instead the emissions of a “typical” European family in 2005 and compares it to the emissions of a 2050 European family. In essence, the emissions of the family could potentially be cut by over 90% with improvements on windows, lighting, a smaller home, a single hybrid instead of two large vehicles, less air travel, solar power, a ground source heat pump, and so on.

In a related note, the Congressional Budget Office released a Climate Change Brief focusing on passenger vehicle emissions (which, according to the McKinsey report, alone account for 17% of U.S. consumer emissions). The conclusion is that pricing carbon dioxide (CO2) at $28 per ton would only increase gasoline prices by about $0.25 per gallon, and thus it would have a negligable effect on driving habits and emissions. If the government wanted to use gasoline prices alone to reduce driving enough to equate to roughly a 35 MPG CAFE standard, gas prices would have to be raised to between $6 and $6.50 per gallon due partly to our suburban sprawl lifestyle. As a result, the CBO concluded that direct CAFE regulations would be more effective at reducing CO2 emissions from automobiles.

The financial crisis will affect how the world addresses global heating
With the $700+ billion financial bailout package complete, and yet no guarantees that it will actually be enough, there’s a great deal of understandable concern among environmentalists that all that money will no longer be available for tackling global heating. According to a story in Environment360, Senator James Inhofe has said “Financial realities will make it much more difficult for the new administration or Congress to put forth a very aggressive, economy-wide climate bill”. The vice president for environment, technology and regulatory affairs at the U.S. Chamber of Commerce, William Kovacs, said “Anyone who thinks you can have a cap-and-trade system in which trillions of dollars of new securities will be traded is just not paying attention to what’s happening on Wall Street.” But Inhofe, who has a history of global heating denialism, and Kovacs, who’s organization is dedicated to commerce unfettered by the pricing of an externality known as CO2, aren’t alone in the global heating debate – environmentalists like Sen. Barbara Boxer are adapting their message to the new political realities – somewhat successfully, if the recent green employment weekend was any indication – and both presidential candidates still support significant carbon emissions reductions.

The Economic Times interviewed Yve de Boer, U.N. climate chief, who said that he was worried about not having enough money available internationally to address global heating, and that the global financial meltdown was serving as a serious distraction from the climate agrement negotiations leading up to Copenhagen in 2009. And analysts have said that the collapse of Lehman Brothers and Merrill Lynch will make credit for renewable energy projects more expensive and harder to find. 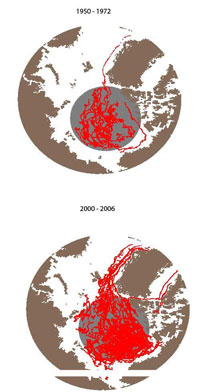 This produces an interesting dilemma. If the Arctic can absorb more CO2, can it absorb enough to offset human CO2 emissions and slow the rate of global heating? Or will the reduced albedo change dominate, warming the Arctic to the point that methane hydrates undergo massive melting? I suspect some of the existing climate models are already being tuned to incorporate the new data.

Scientists don’t know what fewer sunspots means for global heating
In the case of the Arctic, both updated CO2 absorption by the ocean and albedo changes can be entered into climate models relatively quickly. But that’s not the case with the latest sunspot data, namely that there have been more than 200 days this year without any sunspots, the most since 1954, and the solar wind has hit its lowest level in 50 years.

How this low level of solar activity will affect both the next solar cycle and global heating is unknown. Some scientists were expecting an extraordinarily powerful solar maximum, but are now considering revising their predictions. Some global heating skeptics and deniers have been using the lack of sunspots as an argument that “global warming is over” and that we should start preparing for a new ice age or another Little Ice Age, when a single year of low solar activity doesn’t mean that at all. If solar activity stays low, it may help give humanity more time to address global heating, but then again it may be swamped out entirely by rising CO2 emissions. But until the solar scientists know more about what’s causing the reduction, how long it’s expected to last, etc. there will be no way to really know what the long-term effect on the Earth’s climate will be. At this point, however, given the relative strength of the reductions in solar activity as compared to the strength of CO2 emissions, the safest course of action is to proceed in addressing global heating as quickly as possible.