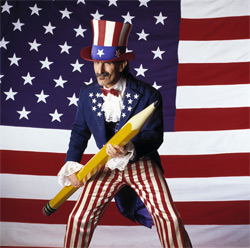 1988 is the first year I can recall being cognizant of national conventions. In the intervening 20 years, never have I seen a convention that has been as much of a three-ring circus as what has already gone on this week at the Republican National Convention in Minnesota. With delays because of the hurricane that didn’t amount to much and the Palin circus, I’m still waiting to hear anything of substance come from the X-Cel Center stage.

Since we might be waiting awhile for something substantive to happen, I thought it might be fun to create a playlist of songs that represent the key players at this week’s RNC. So, with tongue planted firmly in cheek, this Democrat is happy to present the Official 2008 RNC Mixtape:

So tell me, who did I miss, or where am I completely off base? Hit me with your best shot.