To believe or not to believe—Review: God is an Atheist by N. Nosirrah 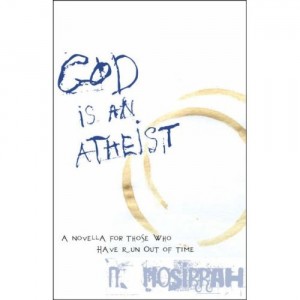 God as an atheist is like a novelist who doesn’t believe in novels.

So perhaps it’s fitting that N. Nosirrah’s highly amusing and deeply thoughtful God is an Atheist is a novella. Specifically, it’s “a novella for those who have run out of time.”

“This is a story without plot, characters, structure, or obvious purpose,” Nosirrah writes. “If a thousand monkeys typing endlessly would eventually produce all the great works of literature, then this is their first draft.”

Nosirrah isn’t kidding when he says there’s no plot. At the start of the book, he nearly runs God over as He is crossing the street. As way of apology, Nosirrah takes God to a coffeeshop and they talk, although it’s as much of a transcendental encounter as a conversation. Nosirrah calls it “magical existentialism.”

In the exchange, God admits He is an atheist.

The novella is Nosirrah’s account of the encounter, which is really just a flimsy—but very cleverly executed—excuse for the author to talk about big-picture concepts like belief and being. He does it with a court jester’s demeanor, though. The result is a text that reads like the caffeinated love-child of flip stream-of-consciousness and thoughtful wit, raised by lonely mountaintop guru starved for human contact.

Nosirrah babbles along merrily, with almost incessant, indomitable charm. Hints of cynicism creep in, but Nosirrah always pulls back from the brink with a good-natured shoulder shrug or, better yet, a smart-ass remark.

For example, he writes: “We decided that our job is to live in the material world, but ultimately to transcend it and realize our connection to God. Once we got that all set up and agreed that the world was like that, then we got down to the real business of fighting each other over our control of resources in the material world and our beliefs about God.”

The book is not intended as a religious or an anti-religious diatribe. There’s plenty to offend believers and nonbelievers alike. But there’s also plenty of thoughtful fodder about the nature of belief itself. There’s also, running as an undercurrent, a sincere appeal to readers to think about what God means to them.

“God speaks in the softest of tones and the harshest of manners. As the all and everything of the universe, He speaks in every form. That’s the rub,” Nosirrah says. “If He would just show up Hollywood style, speak in a Charlton Heston voice, we would find it easy to listen. But He shows up as the constant flow of life itself, in every piece, every quality, in the whole range from ecstasy to calamity. We generally only listen to the part we like, and don’t want to hear the part we don’t like.”

The book never gets much heavier than that. It’s too hipster, too manic, and too self-aware to get too deep—but the book also gives off enough vibes to suggest that this is, indeed, deep stuff if the reader slows down long enough to really dive in for him or herself.

In the meantime, Nosirrah barrels along, pummeling the reader with witty banter, pop culture references, and classical philosophy gussied up as slapstick (picture an apoplectic Immanuel Kant getting red-faced and bug-eyed). God never takes Himself too seriously—and far from being all-knowing and all-powerful, He can’t even place Mother Theresa, although He says He’ll try and Google the name when He gets home.

God is an Atheist is a quick yet provocative read—although whether it provokes thought, anger, or mere annoyance will depend on the reader. Nosirrah is either irresistibly engaging or in dire need of Ritalin. But his whirling dervish style is distinctive and smart. He offers much to think about and much to laugh about, too.