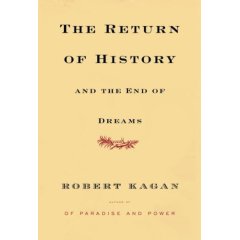 History has returned from the dead. The idyllic future, once considered inevitable by Western leaders in the early 1990s, is dead instead. The dreams of a liberal, all-men-are-created-equal world are dead, too.

So says author Robert Kagan in his new book The Return of History and the End of Dreams, a sober, realistic evaluation of the world today.

But while it may be sober, Kagan’s take on the world is not necessarily sobering—at least not in a slap-in-the-face, really-bad-news-from-the-doctor kind of way. Kagan rationally and dispassionately looks at the world stage and the actors currently playing major roles, as well as the actors who wish they were playing major roles.

Conventional wisdom among political scientists is that the world has one superpower—the U.S.—and many “great powers.” While he doesn’t exactly define what he means by those terms, he does define power: “(t)he ability to get others to do what you want and prevent them from doing what you don’t want.”

Kagan also offer summaries about who the great powers are and what makes them so great. He examines the return of Russia and the rise of China on the world stage. He also examines the appearance of the other great Asian powers, Japan and India.

The resulting dynamics have played out not so much on the geopolitical scale of the 20th Century but on the geoeconomic scale made possible by the ever-intertwining effects of globalization.

Russia, for instance, feels as though it was bullied by the West during its years of weakness following the collapse of the Soviet Union. Russia today feels like post-WWI Germany, despite the obvious breakdown in parallels: the Allies extracted huge sums from post-imperial Germany while the Allies of today have pumped billions into post-Soviet Russia. Yet Russia has an intrinsic belief in what Kagan calls a “special Russian greatness” and the country’s vast oil reserves have given it huge clout to redefine power structures in Europe.

China, which “has never before been as bound up with the rest of the world as it is today,” sees its own economic might, too. As one of history’s most advanced civilizations, China saw itself fall from great heights in the 20th Century. Now, it’s “rebuilding from ruins to wealth faster than any other country has before,” Kagan points out. But it’s also undergoing an unprecedented military build-up, too.

All the while, the Chinese government maintains strict control over the lives of its people. It’s easy for them to control the media, too, Kagan says, “especially with help from foreign corporations eager to do business with the country.”

India sees itself not as a traditional great power but as a moral counterweight to imperial powers of the 20th Century. The country is “deeply dissatisfied with its current great power status,” Kagan says. Once on the opposite side of America during the Cold War, India has become an important ally, just as Japan was on the opposing side during World War Two yet has become an important ally.

The new landscape, Kagan says, is tied together through economic ties that are both strong yet more tenuous that most people would believe because “there is little sense of shared values among the great powers.”

Most dramatically, it’s an article of liberal faith that all men are created equal. The West believed—mistakenly, as it turned out—that democracy was inevitable in the post-Soviet world. The West believed Chinese communism would follow the Soviet example in the wake of the Tiananmen Square protests.

Instead, “For the first time in many years, a real competitive model has emerged on the marketplace of ideas between different value systems and development models,” Kagan says. Democracies face a real and legitimate challenge from autocracies.

The explosive wild card in the mix would be another form of autocracy—or, more specifically, theocracy—the world’s Islamic fundamentalists. According to Kagan, they have a deeply entrenched sense of honor and a yearning for respect combined with what they perceive as a right for their countries to have nuclear weapons. Ironically, those Fundamentalists feel that they are “under siege theologically” by the forces of modernity.

“The hopeless dream of Islamic fundamentalists,” Kagan says, is that it will all just go away. But the world doesn’t work that way; progress doesn’t go backwards. Instead, he advocates speeding up the modernization process. While it might cause short-term turmoil, any period of turmoil always leads to something different. If guided properly, and not left to “inevitability,” the results can be positive and constructive.

Overall, Kagan provides a simply explained discussion of complex current events with enough context to help everything make sense. He peels back issues with clear logic, and his discussion of those issues is even-handed and unhyperbolic.

The Return of History is short, but the entire time I was reading it I felt like I was engaged in a deeply satisfying conversation with Kagan, and I spent more hours reflecting on the content than I spent actually reading. Kagan’s book provides a must-read primer for anyone who plans to watch as the new world order continues to take shape.