The Weekly Carboholic: powering Europe from the Sahara

Spiegel Online published a story last week about how a group of Europeans have formed the Trans-Mediterranean Renewable Energy Corporation (TREC) to develop enough solar-thermal power in the Sahara to power all of Europe. The idea is to build enough solar thermal power plants, plants that use concentrated solar energy to heat salts or boil water which then turn turbines to generate electricity, and then to transmit that energy across the Mediterranean to be used in Europe. Europe gets all the electricity it needs and North Africa gets a massive influx of development money and energy for desalinization plants, among other things. 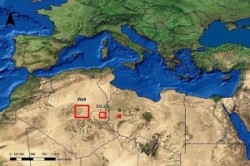 The image at right shows why TREC believes this is a good idea. The big red box is, to scale, the area of the Sahara that would have to be covered with solar thermal plants to electrify the entire planet currently. The smaller box is just the current EU member states, and the red dot is Germany alone. And solar thermal technology is arguably the most mature solar power technology there is, so the technology risk is pretty low. After all, there have been solar thermal plants operating in the U.S. since the 1980s – they never took off because coal is so cheap. There are really only two technical problems – storing excess energy from the day so that the plants can generate electricity all night, and electrical transmission from North Africa to Europe.

The first problem has already been solved, and the solution has been well known for some time. If you use a salt with a very high melting temperature as the primary heat carrier instead of water, you can use large tanks of liquid salt to store that heat overnight. The hot salt is pulled out of the tank gradually and used to boil the water that ultimately turns the steam turbines and generates electricity. Make the tanks big enough, and this system will be able to keep up with the requirements of the European grid overnight without too much difficulty. And Desertec, as the TREC project is named, has estimated the cost at about 350 billion euros (~$545 billion) for the solar thermal plants, complete with salt tanks.

But with all grand ideas, Desertec has the perennial non-technical problem – political will:

Too many questions remain unanswered. Who will pay for the electricity network? Who would own it? Could the various stakeholders agree on a collective guaranteed price for solar thermal electricity fed into the grid?

The latter issue is especially important for investors and industry. Wolfgang Knothe, a board member of MAN Ferrostaal, an industrial services provider, says: “We need political security to get going.”

A lack of money is not the problem. “Renewable energy is in,” says Nikolai Ulrich of HSH Nordbank. “It is relatively easy at the moment to get investment for renewable energy projects.”

Desertec is still only a vision. But visions are needed, says Knothe: “Without Kennedy’s dream, there wouldn’t have been a moon landing.”

Then, the will to make the vision reality existed, although the technology did not. With Desertec, it is exactly the reverse: The technology is available — but the will is missing.

Most people love the idea of being free of the power grid. Photovoltaic (PV) cells on residential or commercial roofs would be great, but even in regions where the costs of installation are low, PV electricity is still too expensive for most homeowners. This is especially true given the many years it takes to recoup the costs of installing solar on a home and our highly mobile society. Why would anyone choose to spend tens of thousands of dollars on aPV system that takes 20 years to recover the investment if they can reasonably expect to be out of the home in less than 10?

Well, a story in Mother Jones last week discusses this exact problem, and what Cicso DeVries of Berkeley, California came up with to solve the problem:

What if, he asked, the city financed residents’ solar rooftops, then levied a 20-year tax assessment on their properties to pay for it? The debt would follow the home, not the owner, and in one fell swoop, the two greatest impediments to home solar would be history.

The cost in Berkeley is expected to be more than $65 per month, but even so it still strikes me as a win for everyone. And according to the article, many other cities and towns around the country are considering their own versions of the same plan.

I wonder how long it’ll be before my hometown gets wise to this idea. Maybe I should email them about it….

I used to be a quasi-vegetarian – ova-lacto plus fish, with the occasional foray into Thanksgiving turkey or a hard-core pork green chili craving I gave in to. When my mother discovered my new food preferences, she was kind enough to give me a book called Diet for a Small Planet, wherein I discovered the idea of eating grains and plants because it was more efficient than feeding livestock and then eating the meat. The basic mathematics of this particular reality has been known since at least the 70’s – cattle take a LOT of feed to get them to maturity and sized for slaughter, and that same amount of feed could be used to feed a LOT more people than the equivalent amount of meat from the cattle can. Now a new study reported in Science News has confirmed yet again that eating red meat isn’t good for you, albeit indirectly:

For the average U.S. consumer, getting the equivalent of one-seventh of a weekâ€™s calories from chicken, fish or vegetables instead of red meat or dairy will do more to reduce greenhouse gas emissions than buying all local, all the time, the researchers say. Crunching the numbers revealed that delivery to the consumer accounts for only 1 percent of red meatâ€“associated emissions. But the production path to red meat and dairy products is clouded with nitrous oxide and methane emissions, mainly from fertilizer use, manure management and animal digestion.

I guess it’s time to add “drives global heating” to the legion reasons why you shouldn’t eat red meat. If only we knew this back in the 70’s…oh, we did, just not quantitatively. Never mind….

Last week, the New York Times reported that several German scientists are, for the first time, attempting to apply climate modeling to predict overall climate changes for a region over the next decade. What makes this unusual is that the climate models in use today for long-term forecasts aren’t accurate enough on the scale of a decade to make significant predictions – the German model is a first attempt at changing this.

According to the NYTimes, the model successfully predicted, with rough accuracy, the climate of the 1990s when it was given the 1970s and 1980s as inputs. But the predictions were only roughly accurate for North America and Europe – Africa’s climate was significantly different in the models than it was in reality. Given that most disciplines have modeling systems and equations that apply very well over some scales but not others, this is a limitation to thegerman models, but is likely not a fatal flaw, at least so long as the models are used and interpreted correctly. Most interesting, however, is the fact that the models predict that Europe and North America will be slightly cooler over the next decade as a result of shifting oceanic currents in both the Pacific and Atlantic oceans.

But lest we wrongly assume that a localized cooling trend over two continents equates to a reversal in global heating, I’d like to quote for you Dr. Kevin Trenberth of NCAR, from the end of the NYTimes story:

“Too many think global warming means monotonic relentless warming everywhere year after year…. It does not happen that way.”

For more information on climate modeling, see this article from the BBC.

Anyone who supports nuclear power has to do so with their eyes open. And that means acknowledging that nuclear wastes are a problem, that there won’t be enough nuclear fuel to go around without breeder reactors and the likely non-proliferation issues they bring up, and that some countries (the U.S. and Russia, for example) have done really stupid things with their nuclear programs and could stand to learn many things from other countries that have good nuclear programs (France and Japan, for example). But very nuclear energy supporters know anything about mining – if they think about it at all, they figure that the carbon emissions of mining coal roughly offset the emissions of mining for uranium. A new Australian study reported on by the BBC questions this assumption.

The problem is fundamentally one of ore quality, and it’s fundamental to mining in general – the greater the demand for the mined material, the faster the cheaply and easily extracted sources of that material are depleted. And when all the easily-extracted ores are gone, it takes more energy, time, and money to extract progressively lower quality ores. The study, published in the journal Environmental Science & Technology, is claimed by “experts” for the BBC as “the first such report to draw together such detailed information on the environmental costs incurred at this point in the nuclear energy chain.” And while the problems all relate to uranium ore extraction, much of the additional emissions occur as secondary effects – transportation of the ore by truck or train from the mine to the refinery, additional energy required to extract lower concentration uranium from the ore, and so on.

That being said, however, the BBC also quotes a representative of the Nuclear Energy Agency, Thierry Dujardin, as pointing out one very important fact – even at its worst, nuclear energy’s carbon emissions are still lower than fossil fuels.

“Even in the worst case scenario for CO2 emissions, the impact of nuclear on greenhouse emissions is still very small compared with fossil fuels.”