This past week saw some unpleasant news for the anti-global heating deniers who believe that increased CO2 emissions will enhance plant growth. The Vancouver Sun reported a new study that found that increased CO2 did not have the expected effect on food crops. Scientists at Southwestern University in Texas found that increased CO2 did in fact improve the growth of the crops they tested, but that the protein content dropped, making them less nutritious: barley, wheat, and potatoes suffered a 10% or greater drop in protein content, and soybeans dropped 1.4%. The Vancouver Sun story also pointed out that most people who believe that the breadbaskets of the world will simply shift further north are sorely mistaken due to the less fertile soils in higher latitudes. Finally, with a rising sea level, many of the most fertile lands in the world – river valleys and deltas – would be at risk of submersion or salt contamination. In other words, not only will there be less land on which to grow food to feed the Earth’s growing population, but that food would be 10% less nutritious too. Talk about a double-whammy all but guaranteed to cause mass starvation. It’s the details like this that make the “insurance policy” argument so powerful – if you invest now in reducing carbon emissions, you increase the likelihood that you won’t need to turn away millions of starving refugees in order to feed your own citizens. Or worse.

FutureGen, the “clean coal” pilot project created with great fanfare by President Bush several years ago, was canceled last week with significantly less fanfare. According to the Houston Chronicle, Energy Secretary Samuel Bodman and Deputy Energy Secretary Clay Sell believed that the FutureGen project was too expensive, and that small-scale capture programs scattered around the country would better serve the taxpayer. In response to the news, several of Illinois’ congressional representatives contacted President Bush to express their concernsf, and the FutureGen Alliance’s chief executive, Michael Mudd, is quoted as saying FutureGen was “America’s best hope for near-zero emission coal technology.” While I’m not willing to buy into Mr. Mudd’s rhetoric, I’m also not willing to give the Department of Energy (DoE) a pass here either. Decarbonizing our economy will require a great deal of research and development, and R&D involves risk and costs money. Sometimes, as in the case of untried technologies like coal gasification integrated with carbon sequestration (i.e. FutureGen), the risks and costs are significant. But that doesn’t mean that they’re not worth both the risk and the cost. “Clean” coal isn’t a long-term solution, but barring significant and unexpected technological breakthroughs in other electricity generation technologies, it’s almost a required short-term solution. Unfortunately, the DoE didn’t see it that way. We can’t discount the possibility that, as unnamed Illinois officials claimed in the story, the President or his subordinates in the DoE weren’t thrilled that Texas had lost the FutureGen project to Illinois, but it’s probably more likely that, with a $3 trillion budget coming out, the Administration had to cut somewhere. And since President Bush is hardly supportive of limiting greenhouse gas emissions, his own FutureGen project made a convenient target.

As I alluded to above, coal can only be made so “clean.” The smoke plumes contain mercury, sulfur dioxide, lead, and even carbon dioxide. But the ash created in the process of burning coal isn’t exactly clean either, and according to a story in the Washington Independent, “clean” coal processes may be responsible for creating far more toxic ash even as it reduces the amount of toxins released into the air. Clean coal is burned with limestone to capture various toxins, but the limestone is fused into glassy ash particle that then have to be disposed of. Those ash particles contain extremely high levels of all the airborne toxins that would have been released into the atmosphere – after all, conservation of mass requires that whatever goes into the coal plant has to come out again, either in the smoke or in the ash, and if it’s not in the smoke, it has to be in the ash. According to the article, the Environmental Protection Agency has found that disposal of the ash can lead to high levels of carcinogens in drinking water when improperly disposed of, and a recent Pennsylvania study also quoted in the article found that coal ash dumped into old mines was contaminating drinking water with up to 30 to 40 times the federal drinking water standards for toxic chemicals like arsenic, selenium, lead, mercury, cadmium, nickel, copper, chromium, boron, molybdenum, and/or zinc. In fact, one of the authors of the study found higher levels of lead in water from a coal ash disposal site (presumably the Ellengowan and BD Mines mentioned in the study, although the Washington Independent story doesn’t say) that was higher than found at a lead-acid battery disposal pond. And this is the stuff that the DoE claims is safe enough for use in wallboard, agriculture, and concrete. Given the nature of the toxins, I might – might – be able to accept use in some kinds of concrete, but I don’t want toxic waste in my wallboard. And if coal ash is too toxic for drinking water, it’s too toxic for agricultural use too. I wish good luck to all the people in Pennsylvania (I went to Penn State for undergrad and remember fondly the beauty of the state) in fighting the DoE and the utilities who want to bury toxic waste in mines without first protecting the people from drinking water contamination.

After some bad news about “clean” coal, it’s time now for some mixed news about oil development. According to the Canadian Press, Suncor is expanding production at their oilsands refining operation in Alberta. With oil at nearly historic heights (even adjusted for inflation), there are significant economic incentives for companies like Suncor to invest heavily in increasing production of sub-optimal oil sources like oilsands. Unfortunately, high oil prices are both a boon and a bane for addressing global heating – high oil prices drive people away from gas guzzlers and using heating oil, but they also spur new investment in new sources of oil. In fact, there’s far more oil locked up in Canada’s oilsands or the oil shale of the western United States than there is in all of the Middle East – it’s just very difficult, and thus very expensive, to extract and make into useful oil. But if oil shot to $300 per barrel for some odd reason, there’s no doubt that the trillions of barrels of oil locked up in hard-to-reach deposits would become suddenly economically viable. Ultimately, high oil prices actually push off the date for Peak Oil as the economic incentives to produce more oil from poor quality sources increases, and so oil prices actually produce a catch-22 for alternative transportation – high oil prices ultimately makes more oil, and thus carbon emissions, but high oil prices are also one of the few things that will drive people, corporations, and governments away from oil at all. Given this catch-22, pure economics won’t solve this particular problem – it will take either cultural change from the bottom up or government mandates of some kind, or both. 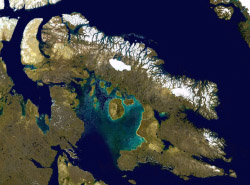 And in our last story for this week, Canada.com reports that there are plants being exposed by melting ice in northern Canada that have been covered for 1600 years. Baffin Island, one of the largest islands in the world, has many small ice fields and caps in its interior that have been slowly melting, losing about half of their total volume over the last 50 years. Radiocarbon dating of the recently exposed mosses and lichens has indicated that the ice cap on Baffin Island is at its smallest since at least 350 AD and may, in fact, be the smallest its been since 2,800 years ago. No only that, but the so-called Medieval Warm Period (MWP) between about 1,000 and 1,400 AD didn’t even cause the ice to shrink as much as it has in the last 50 years. This conclusion supports the contention by some climate scientists that the MWP may not have been global in extent and that it very likely wasn’t as warm as anti-global heating deniers claim it was even though it was during the MWP that Greenland was colonized. Not only that, but the ice cap data gathered by the University of Colorado scientists who did the research suggests that the “Little Ice Age” may have in fact been caused by volcanic eruptions in 1280 and 1450 AD that tipped the climate over fro a warming trend to a cooling trend, rather than or in addition to orbital variations and solar forcing.