Why I am for Obama: It's more than just the man, it's the movement 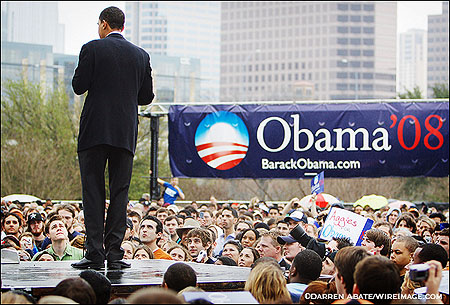 What’s the difference between a skeptic and a cynic?

A skeptic is someone who, when told something, doesn’t immediately believe it to be true and looks deeper into the issue before making their decision.

A cynic is someone who, when told something, automatically assumes it to be false, and doesn’t bother looking any further, because it’s just got to be bullshit.

It’s essential, especially in these times of fear and paranoia, that we maintain a healthy skepticism about what we are told. It was lack of skepticism that mired us in the endless hell of the Iraq war, after all. But I fear that genuine skepticism has been swamped by the all-consuming cynical passivity that says, “This is all bullshit, so why should I care or do anything about it? None of it matters.”

But it does matter. And watching the meteoric rise of Barack Obama has reminded me of how much it can all matter, for those who’re willing to believe.

As has been noted in the press and on the Net, Obama’s campaign has transcended a typical political stump and is becoming a flat-out movement for change. His team has tapped into the restless sleeping giant that is the Millenial Generation, appealing to them with the latest social networking tools and paeans to togetherness, unity, and an end to divisiveness–and they’ve responded in incredible numbers. Every primary is the same–youth turnout is off the charts, and they’re breaking for Obama in a large way.

But it’s not just the young–Obama’s “can-do” spirit is inspiring the old, the apathetic, the never-voted-before. Even those who aren’t sure about him or don’t believe in him are giving him a look:

“Obama is by no means my choice, and I will not go for him just because he’s black,” says Tinia Bland, a 43-year-old registered Republican who says she is leaning toward voting for Clinton. “He will have to show me that he can lead a nation and that my concerns will be met.” Still, she arrived five hours early for Obama’s rally in Jersey City, her 8-year-old son Elijah in tow. “I want him to see there is a man who looks like him, and that he is capable of making phenomenal decisions, and that this is an opportunity that he can aspire to,” she says. “I really see him as a uniter. There doesn’t have to be a white America and a black America anymore, and I like that.”

In my lifetime, I can’t remember any politician being able to inspire and evoke passion and hope–the willingness to believe and put in the work to bridge belief and reality–that Obama does. My Republican friends would probably invoke Reagan, but I’m too young to say for sure if that’s a legitimate comparison (on any level). This is one of those moments that simply hasn’t come around in the political cycle for a good long time.

Tom Hayden, who knows a thing or two about earthshaking generational and political movements, has the best take on this I’ve read yet:

I have been devastated by too many tragedies and betrayals over the past 40 years to ever again deposit so much hope in any single individual, no matter how charismatic or brilliant. But today I see across the generational divide the spirit, excitement, energy and creativity of a new generation bidding to displace the old ways. Obama’s moment is their moment, and I pray that they succeed without the sufferings and betrayals my generation went through…If history is any guide, the new “best and brightest” of the Obama generation will unleash a new cycle of activism, reform and fresh thinking before they follow pragmatism to its dead end.

It is the nature of all things in history to pass away and be cast aside so that the new can usurp the old. We shouldn’t forget what has come before, but nor should we be slave to it. I think this is another reason Edwards (who was my guy first and foremost) never caught fire–he underestimated, as did I, the symbolic change value of a black man or a woman leading the most powerful nation on Earth. Edwards recognized this in his farewell address, and I see it again and again in conversations with friends of mine who aren’t obsessive political junkies like myself.

But this isn’t enough–you need substance in this day and age. You need real policy positions on real issues of importance, and on this Obama is far from perfect. I’m skeptical of Obama’s almost pathological need to be all things to all people. I worry about his health care policies, some of which are dangerously to the right of Clinton. I worry about his dalliances with anti-gay pastors like Donnie McClurkin. I worry that his sharper, more populist stances only came because Edwards was stealing the show with them.

Yet, on balance, there is more good than bad in the meat of Obama’s record. Obama’s technology proposals are the most audacious and forward-looking of all the candidates, only beginning with his support for net neutrality. He is against the endless wars we are currently fighting. He was against the bankruptcy bill and supports mortgage law reform. Even on what seems like a clear-cut issue–banning cluster bombs in civilian areas–where Clinton took the convenient path, Obama took the right path. Hell, he’s even gotten his mind right on fully funding our grievously undermanned consumer protection agencies and policing imported toys for lead content. He has made numerous mistakes–and will probably make more–but he’s also evinced an instinct for coming correct on the biggest issues, and for emphasizing why both big and small issues matter. This strikes me as a man who will learn from his mistakes, not stubbornly dig in his heels and compound errors with even more grievous retrenchments, as the Decider has done.

Obama is not the new JFK. He wasn’t my first choice for candidate. And both of those things are fine. This is not the ’60s, nor is it the ’90s. My time for a movement has passed, if it was ever really here. This is a movement for a new generation, for a new age of people who are excited and passionate about politics like never before. And that gives me hope in my own right.

I’m a confirmed skeptic, but at my core, I’m not a cynic. I still believe our government can protect us and make our lives better if we do the job right. I believe that people working together can make a difference, and one man can change the world if they’re the right man. I believe that humans are essentially decent, good people who sometimes take the wrong path, and that America has the power to inspire the world to new levels of greatness if it holds to the moral truths and principles it was founded on.

And Barack Obama inspires me to continue that belief, just like he’s inspired his movement to propel him to becoming not only our first black president, but the first leader in a long time who can truly lead, as opposed to rule, govern, bully, or terrorize. That’s why I am for him as President–he doesn’t just inspire me to hope, he inspires me to believe that we can make the world better.

I’m a skeptic, but I’m also a believer. Does that mean I believe Obama and his movement can take the White House? To coin a phrase, “Yes. We. Can.”