VerseDay: patience is a virtue, so the poets say… 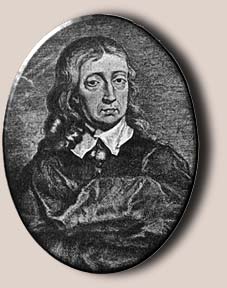 Let’s start with a poem by one we’d call these days a religious fanatic:

WHEN I consider how my light is spent,
Ere half my days in this dark world and wide,
And that one talent which is death to hide
Lodged with me useless, though my soul more bent
To serve therewith my Maker, and present
My true account, lest He returning chide,
‘Doth God exact day-labour, light denied?’
I fondly ask. But patience, to prevent
That murmur, soon replies, ‘God doth not need
Either man’s work or his own gifts. Who best
Bear his mild yoke, they serve him best. His state
Is kingly: thousands at his bidding speed,
And post o’er land and ocean without rest;
They also serve who only stand and wait.’ – John Milton

For those who don’t know Milton’s personal history, he served Oliver Cromwell, Lord Protector of England, he who fomented the English Civil War and the execution of Charles I and tried to remake England into “The New Jerusalem,” as Latin Secretary (think of it as roughly the equivalent of Secretary of State). In that role he defended the dominionism of the Puritan government and attacked those who questioned the right of that same Puritan government to impose its religious beliefs on free people as law of the land.

The sonnet we consider here was written at a time of crisis in his life. Like many artists, Milton was able to use such times of stress and misery as inspiration. Milton had lost his eyesight by having worn his eyes out with reading and study (The Norton Anthology of English Literature famously describes Milton as having read “everything written in English, Latin, French, Italian, and German,” adding as an afterthought, “of course, he knew The Bible by heart.”) After completing his M.A at Cambridge, Milton retired to the family home in the country to read and study for roughly 12-15 hours a day every day for five years. Only then did he consider starting his career as a poet and writer. He was a patient guy, that Milton….

All that work wore his eyes out, however, and he was blind by the age of 43. The above poem is Milton’s acceptance of his fate. And that famous last line, “They also serve who only stand and wait,” has been a mantra to many a troubled soul caught in a situation where he/she felt helpless and ineffectual. It also serves as a reminder that sometimes the best thing one can do is be patient.

Milton was. Even after his world collapsed around him when the Commonwealth fell and Charles II was restored to the English throne, Milton remained steadfast and patient, though it took the intercession of friends to prevent his execution by Charles’ more vengeful nobles. Old, blind, and impoverished by then, Milton waited patiently for something/anything to give his life meaning again. And the muse spoke.

The result was Paradise Lost, arguably the greatest poem in the English language.

Now a poem by a somewhat differently inspired guy:

A NOISELESS, patient spider,
I mark’d, where, on a little promontory, it stood, isolated;
Mark’d how, to explore the vacant, vast surrounding,
It launch’d forth filament, filament, filament, out of itself;
Ever unreeling them–ever tirelessly speeding them.

And you, O my Soul, where you stand,
Surrounded, surrounded, in measureless oceans of space,
Ceaselessly musing, venturing, throwing,–seeking the spheres, to
connect them;
Till the bridge you will need, be form’d–till the ductile anchor
hold;
Till the gossamer thread you fling, catch somewhere, O my Soul. – Walt Whitman

Walt Whitman was in many ways Milton’s opposite. He was a Quaker pacifist who served as a nurse in Union army hospitals during the American Civil War while Milton was mouthpiece for the violence of Puritan militarism during the English Civil War. He was a gay man who celebrated heterosexual union while Milton, thrice married, advocated for divorce. He had only a 6th grade education (though like Milton he read voraciously), yet he taught school while Milton, a man of great erudition and the finest educational training, avoided the classroom. Whitman’s poetry sprawls freely while Milton’s marches in the most circumscribed cadences.

Yet both men were patient while waiting for the muse to guide them to their poetic destinies. Milton was 32 by the time he seriously began his career as a poet. Whitman was 36.

And Whitman, like Milton, knew much of disappointment. His magnum opus, Leaves of Grass, was self-published because no one would take it on – many publishers considered it objectionable at best, obscene at worst. Reviewers were generally unkind to Whitman – with the prominent exception of Emerson. (John Greenleaf Whittier is said to have thrown his copy of the book into the fire.)

Whitman’s patience is of a different kind than Milton’s. The spider in the poem, like the poet who created him, does not docilely wait upon a higher power to direct his way. It reaches out in every direction seeking to find – God, truth, love – in a steadfast, continual attempt to connect with the universe. Much as Whitman the poet continued to revise and re-publish his poetry to connect with an audience.

Whitman’s book would gradually gain in popularity – and length – as Whitman expanded it throughout the rest of his life. And, like a “noiseless, patient spider,” Leaves of Grass spread its message and influence across American literature until Whitman’s masterpiece would come to be seen as (again, arguably) the greatest book in the history of American poetry. And Whitman himself – the Quaker of humble background and meager formal education – would be acclaimed as the most brilliant, inventive articulator of the American experience ever produced.

So it seems that whether one continues standing and waiting, or one keeps reaching out for connections, patience is a virtue that offers great rewards. So say the poets….