“On The Road” at fifty…goring a Boomer sacred cow….

2007 is a year filled with Boomer anniversaries – the 40th anniversary of Monterrey Pop, 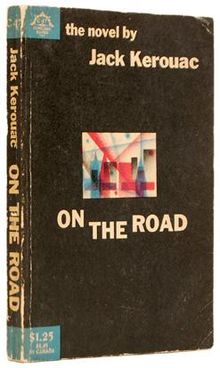 And there’s an ongoing anniversary celebration this year for a book that influenced Boomers as profoundly as perhaps any other this side of Siddhartha or The Catcher in the Rye – we’re in the midst of the 50th anniversary celebration of the publication of Jack Kerouac’s Beat Generation opus, On The Road. And that raises a question – for me, anyway:

What is it about the 1950’s that makes some of the artists from that decade, like Kerouac, feel overrated?

Whether it’s Jackson Pollack’s paint splatters hailed as profound artistic expressions or James Dean’s alternate moping and emoting acclaimed as great acting, some of the major figures of American arts and culture from the “gray flannel” decade – while interesting as harbingers of the social and creative ferment that the 1960’s would become – seem somehow quaintly modish now in ways that artists from what Todd Gitlin calls the “Years of Hope, Days of Rage” don’t. Maybe because the 1950’s decade was so essentially phony – so seemingly placid, so seemingly without worry, so seemingly Ozzie and Harriet – any kind of rebelliousness, even the most confused and pointless, seemed powerful. And so On the Road seemed much more then than it actually is.

To begin with, On the Road is a preachy book. It focuses the reader almost entirely, at the

exclusion of nearly everything else it claims to ponder, on some amorphous idea of transcendence that keeps changing throughout the book and that the main characters, Dean Moriarty and Sal Paradise, can’t seem to agree on. While Kerouac does succeed in pointing out some of the limitations of being tied to phoniness like clock based time, Salinger does the same in The Catcher in the Rye without as much blathering about temporality and existential dilemma (better left to the Camus and Sartre sort) and the need for breaking free of time’s (and life’s) restrictions. Holden finally accepts that his repressed culture drives him crazy and deals with it, honestly if somewhat shakily – Sal keeps trying to escape his, even when he realizes he can’t….

And On the Road is a hard book to read. It rambles and rhapsodizes, sometimes meaningfully, sometimes pointlessly, and doubles back on itself and seems to exclude us as much as share with us. I think of one of Kerouac’s contemporaries, Richard Brautigan, who is able to raise the same sorts of cosmic and karmic questions that Kerouac does (in works such as Trout Fishing in America or A Confederate General at Big Sur) in much less pompous (and certainly more humorously enjoyable) fashion.

And I wonder why all the fuss about On the Road.

I would never deny the book has power and poetry:

Something, someone, some spirit was pursuing all of us across the desert of life and was bound to catch us before we reached heaven. Naturally, now that I look back on it, this is only death: death will overtake us before heaven. The one thing that we yearn for in our living days, that makes us sigh and groan and undergo sweet nauseas of all kinds, is the remembrance of some lost bliss that was probably experienced in the womb and can only be reproduced (though we hate to admit it) in death. – On the Road

But this, for me, raises a continuing problem with the work of the Beats, Kerouac in particular – too many times they’re willing to raise the great questions about life without being willing to negotiate to answers of come kind – it’s seems too easy to disappear into the maw of the road, running to the next experience, without examining past experience for its merits and failings:

I like too many things and get all confused and hung-up running from one falling star to another till I drop. This is the night, what it does to you. I had nothing to offer anybody except my own confusion. – On the Road

Confusion, in and of itself, can be interesting. But it’s the moving past confusion that gives us perspective. And Kerouac doesn’t give us that:

…the evening star must be drooping and shedding her sparkler dims on the prairie, which is just before the coming of complete night that blesses the earth, darkens all the rivers, cups the peaks and folds the final shore in, and nobody, nobody knows what’s going to happen to anybody besides the forlorn rags of growing old…. On the Road

And so the road becomes just another rebellion against whatever there is:

We don’t know where they’re going either, even by the end of the novel. That’s okay on some levels. I can live with ambiguity as well as the next person.

But it makes me feel like On the Road hasn’t been honest. It’s just another con, a dupe, a snow job. Maybe one Kerouac’s doing on himself as well as us.