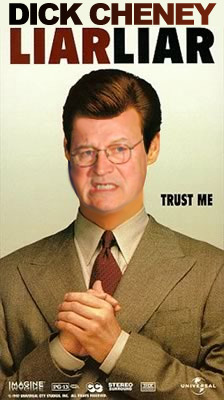 Jim Booth does a nice job on The Dick and some of the lies he told a Wyoming Boys State crowd a few days ago. It’s asking a lot of a guy – even somebody as smart and thorough as Jim – to address every lie that Cheney tells, and I thought I’d take a moment and point out one that he missed.

In response to one boy’s question about whether the Iraq “war” could be won, The Dick reflexively trotted out the lie that he just … can’t … stop … telling!

â€œThe fact of the matter is Iraq is part of the global war on terror,â€ he told the students. â€œAnd youâ€™ve got to go back and look at what happened on 9/11.â€ Cheney recounted the tale of the late al-Qaeda operative Abu Musab al-Zarqawi, one of the administrationâ€™s great pre-war myths:

The worst terrorist we had in Iraq was a guy named Abu Musab al Zarqawi, a Jordanian by birth; served time in a Jordanian prison as a terrorist, was let out on amnesty. â€¦ Then when we launched into Afghanistan after 9/11, he was wounded, and fled to Baghdad for medical treatment, and then set up shop in Iraq. So he operated in Jordan, he operated in Afghanistan, then he moved to Iraq. (Link.)

Early on in the administration’s frenzy to develop a fraudulent case for war against Iraq, top White House officials couldn’t say hello without working in “Iraq,” “9/11” and “al Qaeda,” and for those of you with a Boolean search fetish, it was rare for the terms to fall more than three words apart from each other. As time passed and nasty facts began to intrude on this bit of myth-making they still gamed the rhetorical landscape – they stopped overtly saying that 9/11 and Iraq were related, but still found ways to utter the terms in close proximity. Clever propaganda tactic, that – you’re cynically juxtaposing things you know to be unrelated in ways that might leave a casual observer in possession of the wrong idea. Not your fault, though – you didn’t say it.

Finally Dubya and his band of fork-tongued merry men were compelled to look directly into the camera and say, on the record, that there’s no link between Iraq and 9/11. And of course, we never said there was. So now that’s cleared up…

Periodically The Dick skulks back around the barn and pleasures himself with that old misdirection, though – I’ve heard him do it once or twice in recent months, and in WYO he was at it again. This time he resorted to the shameless and thoroughly debunked al-Zarqawi lie, but why not? These are high school kids and the Vice President is talking to them. When dealing with minds this impressionable, it has to be tempting for a pathological liar like Cheney to see how far he can go without getting called on it. Let’s see: “When I was a young man I was an astronaut! Yeah, I went to the moon. Yeah, that’s the ticket…”

Once upon a time I was honored to be a counselor at the North Carolina Boys State. It’s a worthy, important program that gives bright, engaged young minds a chance to test themselves against other future leaders. That these students should have to sit as this arrogant waste of skin knowingly lies in their faces is simply beyond disgusting, and it’s a shame that one or more of those counselors didn’t find the courage to stand up and say, before the whole assembly, that this is what corruption looks like.

Of course, had a counselor done that he’d be in Gitmo by now, so I can’t be too hard on them. Hopefully, though, each of those counselors later led a frank discussion where they traced, step by step, exactly what had just happened.

I hope a few light bulbs went on in a few heads. I hope some of those kids were too angry to sleep that night.